General
The link was copied
News ID: 3482207
TEHRAN (IQNA) – Bahrain’s top Shia cleric Sheikh Isa Qassim decried the recent Quran burning by an Islamophobe in Sweden and called on the wise in the world to strongly condemn such sacrilegious acts. 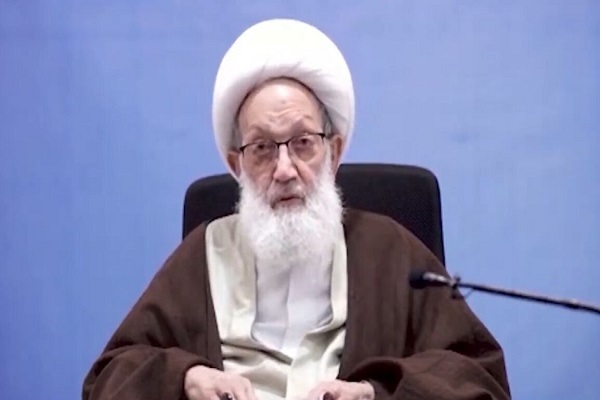 Rasmus Paludan, leader of Danish far-right political party Hard Line, burned a copy of the Holy Book in the Swedish capital of Stockholm on Saturday.

Surrounded by police, Paludan set fire to the copy of the Quran with a lighter following a long diatribe of almost an hour, in which he attacked Islam and immigration in Sweden. About 100 people gathered nearby for a peaceful counterdemonstration.

The sacrilegious move has drawn widespread condemnations in the Muslim world.

In a statement on Tuesday, Sheikh Qassim said the incident was a crime committed not by an individual but by a government and that it revealed the disgrace of those behind it.

He rejected condoning such moves under the pretext of freedom of speech, saying that crimes like this are stark violation of religious sanctities and lead to creation of Fitna (sedition) in the world

The senior cleric added that using the language of insults and accusations and violating the sanctities of religions under the banner of freedom is a fraud and fallacy.

He also criticized the West’s double standards when it comes to the issue of freedom of speech, citing measures taken against those who deny the Holocaust as an example of this behavior.

Sheikh Qassim went on to say that the silence or complicity of Western governments in the growing trend of Islamophobic acts reveals their intent to spread chaos in the world and undermine global security.