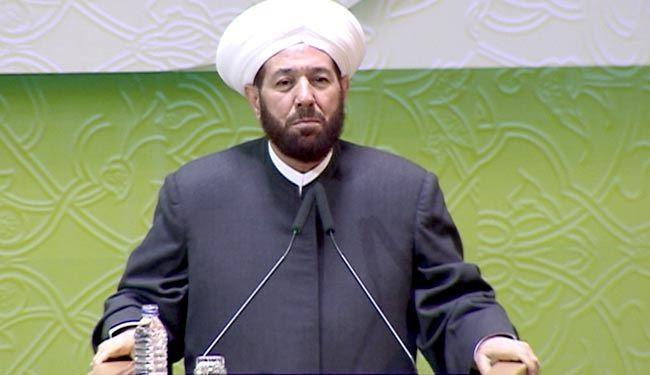 Addressing the opening of the 28th International Islamic Unity Conference, he added that the two bodies’ cooperation can also help to enhance unity and solidarity in the Muslim Ummah.
The conference began in Tehran on Wednesday morning with the participation of 500 scholars and political and religious figures from 65 countries.
Sheikh Hassoun thanked the Supreme Leader of the Islamic Revolution Ayatollah Khamenei and the Iranian nation and government for organizing the conference.
He said the conference is being held concurrent with the birth anniversary of the Holy Prophet (PBUH), adding that “the Prophet (PBUH) who brought us together around Islam should be our role model”.
The Syrian Mufti underlined that the Muslim Ummah needs to maintain unity and unanimity in order to foil enemy conspiracies.
Elsewhere in his remarks, Sheikh Hassoun underlined that Syria has secured victory over (terrorists supported by) 83 countries.
He also appreciated the Islamic Republic of Iran’s support for the resistance movement in Gaza and Lebanon and said the Palestinian resistance movement’s victory in the recent Gaza war was achieved thanks to the supports from Iran.
http://iqna.ir/fa/News/2683026