General
News ID: 2920256
TEHRAN (IQNA) – The massive destruction, the siege and the Zionist aggression on Gaza Strip didn't prevent its people from organizing the anti-apartheid week - 2015 in which many activities were organized. 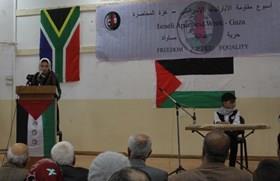 Abdul Rahman Abu-nahl, the coordinator of the Boycott National Committee (BNC), said: "After six months of the Israeli massacre in Gaza, the National Committee for Boycott, Divestment and Sanctions (BDS) against Israel launched anti-apartheid week 2015 in all parts of occupied Palestine", PIC reported.

He pointed out that the events will take place in various countries across the globe, and added: "The boycott movement is aimed at forcing the Israeli Occupation regime to comply with the International Law and meet conditions that are necessary to guarantee the Palestinian people's right to self-determination”.