Social
News ID: 3286485
TEHRAN (IQNA) - A total of 47,210 racist crimes were reported across the European Union in 2013, with an anti-racism organisation warning that this is only the “tip of the iceberg”, as many crimes go unreported. 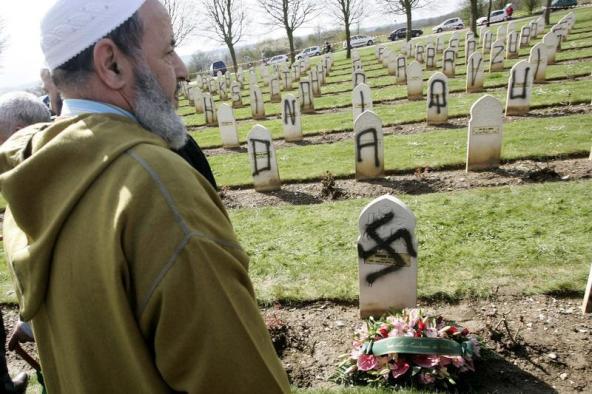 Muslim women, people of African descent/black Europeans and Roma are reported to be most at risk of racially motivated crimes, Newsweek Reported.

The report, the first of its kind which examines racist crimes based on civil society research as opposed to official state reports, was carried out by the European Network Against Racism (ENAR). Just one third of EU countries have recorded and published information on racist crimes for 2013.
The report says that there has been a considerable rise in violence over the last few years, attributing the increase to the economic crisis, and the growth of far-right parties and hate speech in political discourse. ENAR believes that the figures for 2014 will show even higher rates of racist crime, due to the conflict in Gaza last summer and the Charlie Hebdo attacks in Paris earlier this year.
Islamophobic crimes are on the increase in France, England and Wales, the report says. Among the more shocking findings is that Muslim women are more likely to be victims of Islamophobic crimes than men, and these crimes are often physical and very violent. According to the Collective Against Islamophobia in France (CCIF), 78% of Islamophobia victims in France were women in 2013.
The report gives the example of a 21-year-old Muslim woman, who was four months pregnant when she was attacked for wearing a jilbab in the Paris suburb of Argenteuil. She later suffered a miscarriage and lost her baby, according to her lawyer. The two male attackers kicked the woman in the stomach, tried to remove her headscarf and later cut off her hair, reportedly shouting anti-Islamic taunts at her.
The report also points out the problem of “under-qualification” of racist crimes, whereby the racist element to a crime is downplayed by authorities and prosecuted as a less serious crime as a result, something it says occurs particularly in Austria, Bulgaria, Cyprus, Estonia, France and Germany.
“What is shocking is how member states do not take into account the racist element in a crime,” says Claire Fernandez, deputy director for policy for ENAR. “The racism element is completely disappearing, that’s really a problem and where we call for more effort and training of police,” she says.
The report highlights the case of a Nigerian migrant residing in Greece who was attacked and robbed. While Golden Dawn leaflets and other Nazi symbols were found in their possession, the police documenting the complaint only considered the crime as a robbery, since €300 were stolen.
An increase in anti-Semitic crimes is reported in five out of 26 countries – in Denmark, Germany, Hungary, the Netherlands and Sweden, while in many EU countries including Estonia, Greece, Italy, Poland, Sweden and the United Kingdom, the most violent physical attacks reported are perpetrated against black and Asian ethnic minorities.
In London, Asian people (from the Indian subcontinent) experience the highest mean rate of victimisation. In Sweden, 980 crimes with an Afrophobic motive were recorded and Swedish police reports of crimes with an Islamophobic motive increased by 69% from 2009 to 2013. There were cases of violence, abuse or incitement to violence against Roma in almost all EU member states.