General
News ID: 3288652
TEHRAN (IQNA) - A British far-right leader, who said he was prepared to go to prison for burying pig heads at the site of a Dudley mosque, is facing expected interrogation by police over his anti-Islam comments in West Midlands. 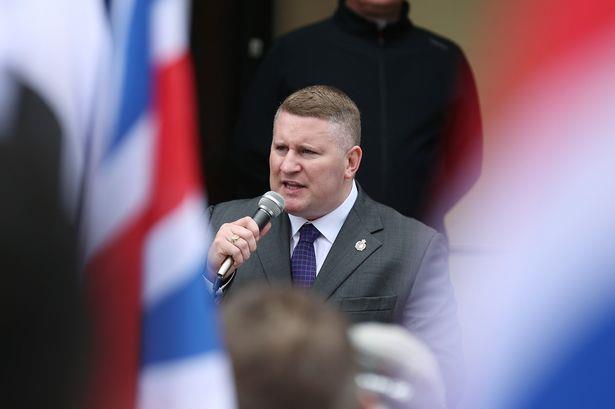 "In the worst case scenario, if we have to, I will personally go and bury a pig," Britain First leader Paul Golding was quoted by Birmingham Mail on Saturday, May 9.
"If that’s what it takes for us to be listened to in our own town, in our own country by these traitor politicians in cahoots with local Muslim groups then that is exactly what we will do.
“If they throw me in prison I will sit there in my cell for a year or two with a smile on my face because I’ll know that big mosque never went up.”
Golding made his offensive comments during Saturday's anti-mosque rally in Dudley that was attended by about 150 supporters of far-right group Britain First.
The far-right leader is not the only one to make offensive remarks. Hateful remarks were also made about Prophet Muhammad in another speech during the rally, according to anti-racism campaigners.
"We heard the same thing in November; that they were going to bury pigs’ heads on the mosque site. The police are aware of it as complaints have been made," Amjid Raza, of Dudley Central Mosque, said.
"I haven’t listened to all of the speech at the rally but comments were made about the Prophet Muhammad, peace be upon him, and these have been reported to the police. If the police decide these are incitement to racial or religious hatred outside what is acceptable under free speech they will take action.”
The construction of Dudley mosque has been facing several protests by far-right leaders to halt the project.
Three months ago, British far-right groups have announced plans to join efforts under one banner to protest the mosque construction.
Led by the English Defence League (EDL), Dudley protest will be joined by the league's divisions across Europe along with far-right members of Britain First and new Pegida UK, a branch for Germany’s Patriotic Europeans Against the Islamization of the Occident.
The demonstrations were also joined by some members of the British Nationalist Party (BNP) and UK Independence Party (UKIP).