General
News ID: 3461888
TEHRAN (IQNA) – People in the village of Diraz, near the Bahraini capital of Manama staged yet another rally on Saturday in support of top Shia cleric Ayatollah Sheikh Isa Qassim. 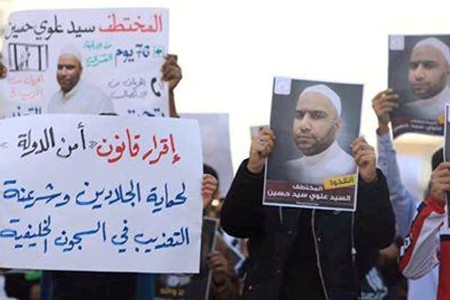 The demonstrators carried photos of Sheikh Qassim and another cleric, Syed Alawi Syed Hussein, recently detained by the regime forces.

They also condemned the ruling Al Khalifa regime’s oppression of dissent and protested against the moves by the regime to virtually impose a blockade on the village, preventing trucks carrying foodstuff and water from entering it.

On Thursday night, too, people held a peaceful rally in Diraz toward the house of Sheikh Qassim.

During the demonstration, the protesters voiced their outrage over of the siege on the cleric’s house and chanted anti-regime slogans in support of the top leader.

The Manama regime forces have placed barricades at more than 20 entrances to Diraz, barring even the shipment of fresh water and foodstuff from entering the village.

Meanwhile, a sit-in that supporters of Sheikh Qassim have staged in front of his house to protect him against the regime forces has now entered its seventh month.

The Manama regime announced on June 20, 2016, that the citizenship of Sheikh Qassim has been revoked, accusing him of sowing sectarian divisions.

The regime later said it would put the senior cleric on trial on charges of "illegal fund collections, money laundering and helping terrorism.”

But Sheikh Qassim has not appeared in any of the court sessions in the past months.

Bahrain, a close ally of the US in the Persian Gulf, has been witnessing almost daily protests against the Al Khalifa dynasty since early 2011, with security forces resorting to harsh measures against demonstrators.

Scores of Bahrainis have been killed and hundreds of others injured and arrested in the ongoing crackdown on the peaceful protests.