General
News ID: 3464473
TEHRAN (IQNA) – A digital exhibition of the manuscript of the ‘Birmingham Quran’, one of the oldest surviving parts of the Quran in the world, was inaugurated at the Umm Al Emarat Park in Abu Dhabi, the UAE. 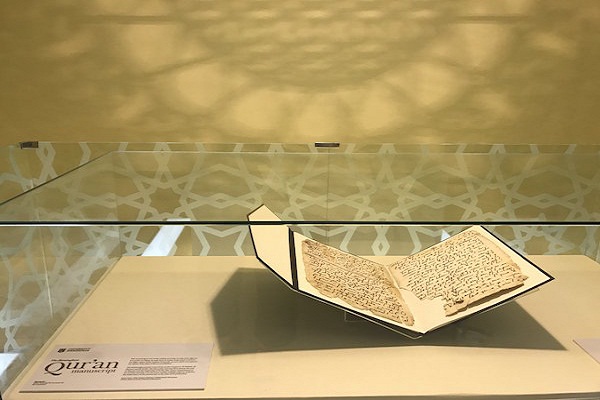 Birmingham Quran is more than 1,350 years old, having been carbon-dated to 468-645AD. The origin of the four-page manuscript, which has been in the possession of the University of Birmingham since the 1930s, had not been properly determined until recently when a professor noticed that the binding appeared uniquely different from known vellum bindings of existing old manuscripts.

Noora Mohammad Al Kaabi, UAE Minister of Culture and Knowledge Development, who attended the opening of the exhibition on Sunday evening, said: "Our two countries share a belief in the importance of preserving, sharing and celebrating culture. I believe that bringing the Birmingham Quran exhibition to the UAE will play an important role in fostering mutual respect and understanding between our nations, cultures and faiths.

"I am delighted that the Ministry of Culture and Knowledge Development has been able to support the University of Birmingham and British Council in bringing this truly exciting digital exhibition to Abu Dhabi as a key part of the UAE-UK Year of Cultural Collaboration.”

The Birmingham Quran exhibition forms a highlight of the UK-UAE 2017 Year of Creative Collaboration, held under the patronage of Shaikh Mohammad Bin Zayed Al Nahyan, Crown Prince of Abu Dhabi and Deputy Supreme Commander of the UAE Armed Forces, and The Prince of Wales.

From Abu Dhabi, the exhibition will move to Atrium 6 in Dubai’s Design District from April 19 to May 3, 2018, according to WAM.

The interactive digital exhibition is open in Abu Dhabi till November 29. More than 14,000 people visited the exhibition at the Sharjah International Book Fair (SIBF) earlier this month.