Bangladesh’s First Quran Sculpture to Be Unveiled on Sunday

General
News ID: 3464808
TEHRAN (IQNA) – The 16-feet-high and eight-feet-wide fiberglass sculpture was inspired by a similar monument in the outskirts of Mecca. 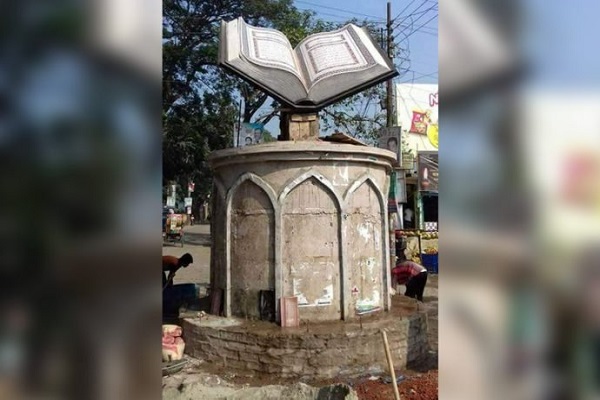 The first sculpture of the Quran in Bangladesh is going to be unveiled in Kasba upazila of Brahmanbaria on Sunday, December 31, 2017.

The sculpture will be inaugurated by the Minister of Law, Justice and Parliamentary Affairs Anisul Huq on the morning of the last day of 2017.

The project, supervised by Kasba Municipality Mayor Emran Uddin Jewel, was constructed by Kamrul Hasan Shipon, a student of the Faculty of Fine Arts at Dhaka University. The Tk6 lakh project was fully funded by the Asian Development Bank. The initiative for the sculpture was taken back in June, and work progressed quickly enough for it to be finished in exactly six months.

The final touches on the sculpture were applied on Saturday.

The 16-feet-high and eight-feet-wide fiberglass sculpture was inspired by a similar monument in the outskirts of Mecca on the way to Jeddah Airport.

A local madrasa principal praised the initiative and hoped it would “illuminate the surrounding area with Islamic values and virtues.”

Kasba police have taken appropriate measures, including security for the law minister, ahead of the inauguration program on Sunday morning.