General
News ID: 3466197
TEHRAN (IQNA) – Deedra Abboud, an attorney, is competing for the Democratic nomination for the US Senate in Arizona. 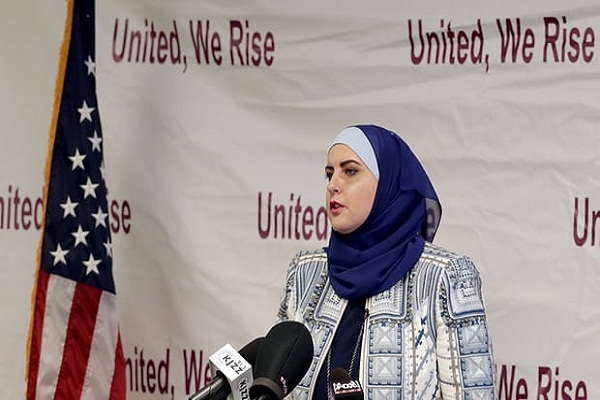 She has never sought public office before. But she has become a fixture in national headlines – in part because of online vitriol generated by the fact she is a Muslim.

Abboud wears a headscarf. Slurs against her have included calling her a “towel head” and suggestions that Muslims should not serve in the US government.

Abboud told the Guardian she saw a “silver lining” in finally being noticed. But she also felt a familiar frustration. She is from Little Rock, Arkansas, as evidenced by her southern twang. Nonetheless, she has had to settle for being known as “the Muslim candidate”.

“I wear a scarf, I don’t want to hide it,” she said. “It’s something I want to take head-on. It’s just sometimes I think it’s relegated to only that.”

Abboud is one of a wave of Muslim candidates seeking elected office in Donald Trump’s America, many spurred into action by the president’s anti-Muslim rhetoric and policies.

“We’re trying to change what leadership and power look like in this country,” said Fayrouz Saad, a 34-year-old from Michigan who if elected would become the first Muslim woman in the House of Representatives.

Nearly 100 Muslims are running for office at state and federal levels. Almost all are Democrats, few have held office before. Several who were interviewed by the Guardian said they did not want a disproportionate focus to be placed on their faith. Much like their opponents, they said, they wished to talk about the issues.

“I’m not really interested in being the first Muslim anything,” said Abdul El-Sayed, another political newcomer who is seeking the Democratic nomination for governor in Michigan. “I know that my constitution does not care how I pray or if I pray, but if I care about the same ideals expressed in the constitution.”

El-Sayed spoke at length about income inequality; he has prioritized access to clean water in a state still feeling the effects of governmental failures that led to a water crisis in the city of Flint. Saad, who likes to refer to herself as “unapologetically progressive”, emphasized the need for “Medicare for All” and raising the minimum wage. Abboud backed net neutrality and voiced support for universal healthcare and affordable public education.

“We are very much American,” Saad said. “We care about this country and it’s more than just about being Muslim, it’s more than about Muslim issues. It’s about protecting what is American and diversifying our elected officials.”

‘The American Dream was being threatened’

The rise of Trump is, however, an unavoidable reality. Muslims voted overwhelmingly in favor of Hillary Clinton; few thought a candidate who vowed to bar an entire religion from entering the US would be elected. They also recall his flirtation with the idea of a Muslim registry and pronouncements that included “Islam hates us”.

From the White House, Trump has picked a fight with the Muslim mayor of London and retweeted Islamophobic propaganda videos by a far-right fringe group, Britain First. But the most substantive blow to the Muslim community was arguably dealt by the supreme court this week.

In one of the most highly anticipated decisions from the bench since Trump took office, the court ruled in favor of the travel ban on several Muslim-majority countries. Although the administration argued the policy was not motivated by animus toward any religion or nationality, civil rights groups roundly condemned it as an unmistakable attempt by the president to make good on his promise to suspend Muslim immigration.

“If Donald Trump were president when my parents were immigrating here, there’s a very realistic chance my whole life could have gone differently,” said Saad. “Donald Trump getting elected was honestly the first time in my life that I felt the American Dream was being threatened.”

Public perception of Muslims remains distinctly negative. A recent survey found that Americans believe only 51% of Muslim Americans respect the ideals and laws of the land. One in five favored denying Muslim Americans the right to vote. The study found a sharp partisan split, with Republicans holding overwhelmingly unfavorable views of Islam and its followers.

Abboud said she had been asked if she pledges allegiance to the flag, if she considers herself “American or Muslim first”.

“It’s these simple ideas that Islam is not compatible with the constitution,” she said. “And even if it isn’t, who cares? I want separation of religion and state. I’m standing very strongly, vocally, and publicly about where I stand on the issues.”

There are at least 3.3 million Muslims living in the US, according to recent estimates, and well over 1.5 billion worldwide. The current crop of US congressional candidates are largely the American-born children of immigrants.

“I actually usually just put it right out there in the beginning,” said El-Sayed, of his faith and background. “It becomes an elephant in the room if you don’t address it. Then you can put it to the side and talk about issues.”

He pointed out that voters’ curiosity swiftly dissipates when they realize his priorities are the same as those of the average American.

“I care about being the best governor for my state,” he said. “And I also happen to be Muslim.”