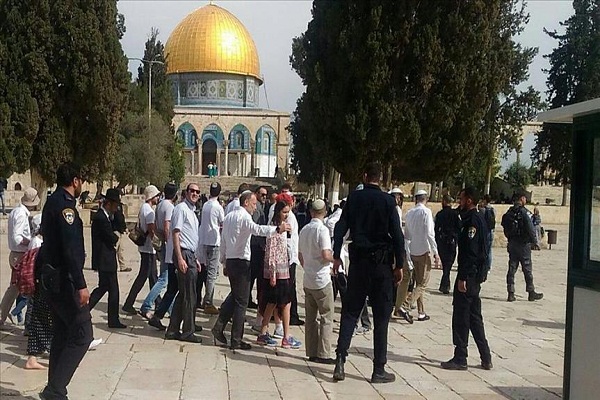 Extremist Israeli settlers and students of Talmudic yeshivas broke into the holy mosque and toured it in groups, under heavy protection by Israeli police.

Muslim worshipers who had held an all-night worship vigil at the mosque were angered by the provocative visit of the settlers, and chanted slogans in defiance before the Israeli police arrested three of them.

Israeli settlers regularly enter the area, and often perform rituals on the site, although Israeli police often close Al-Aqsa Mosque for non-Muslims and suspend all visits to it during the last 10 days of Ramadan when tens of thousands of Muslims converge on this holy site for worship.

Some right-wing Israeli activists have advocated for the destruction of the Al-Aqsa Mosque compound to make way for a Jewish temple.

Palestinians fear that settler tours inside the Al-Aqsa compound are aimed at undermining their right to the area.