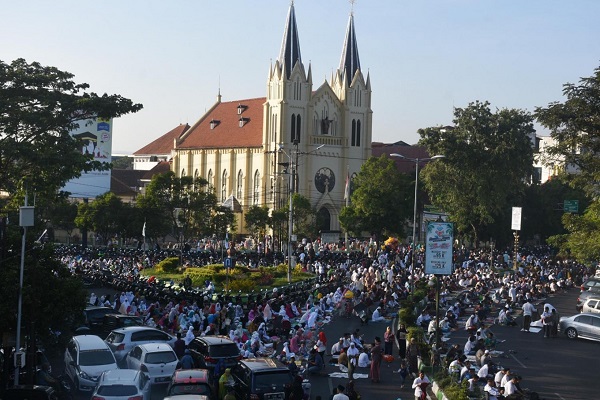 The Kayutangan Hati Kudus Yesus (HKY) church in Malang, East Java,  suspends its morning Mass on Sunday to keep the surrounding roads and area clear for Muslims wanting to join the Idul Adha (Day of Sacrifice) prayer at Jami Malang Mosque, which is located next to the church.
HKY church head Aberto Djono Moi said Idul Adha had fallen on a Sunday several times in the past and activities at the mosque clashed with morning Mass at HKY, which starts at 5.30 a.m.
“We always communicate with each other. We are glad that we are able to help maintain religious peace in Malang,” Aberto said on Friday.
Meanwhile, protestant church Immanuel Malang, which is also located next to the mosque, did not change its morning Mass schedule because it is conducted at 8 a.m., after the Idul Adha prayer has finished.
“Nevertheless, we will [wait until] the Eid prayer ends [to conduct morning Mass] in order to respect our Muslim friends,” priest Ricard Sucahyono of Immanuel Malang church said on Friday.
He added that the church held Mass twice on Sundays, at 8 a.m. and 4 p.m.
“We are all used to cooperating with each other when there are religious activities that involve many people. Sometimes, we also use the mosque parking lot for certain occasions,” Ricard said, adding that the two churches and mosque had maintained a harmonious relationship since they were built some 100 years ago.
Jami Malang Mosque caretaker Abdul Aziz said he and his coworkers made sure to notify their counterparts at Immanuel Malang and HKY about the mosque’s plans for Idul Adha.
“The Idul Adha prayer will be conducted at 6 a.m., 30 minutes earlier than the Idul Fitri prayer,” he said.
Abdul said at least 55,000 people were expected to pray at the mosque for Idul Adha.
“We always tell worshipers to fill the mosque area first to prevent them from crowding the church areas. We don’t want them to disturb other people who pray at the churches,” he said.
Source: thejakartapost
0
LIKE
Error Report
Tags: indonesia ، churches ، mosque ، eid al-adha ، Prayer ، Malang ، Christians ، coexistence
Your Comment