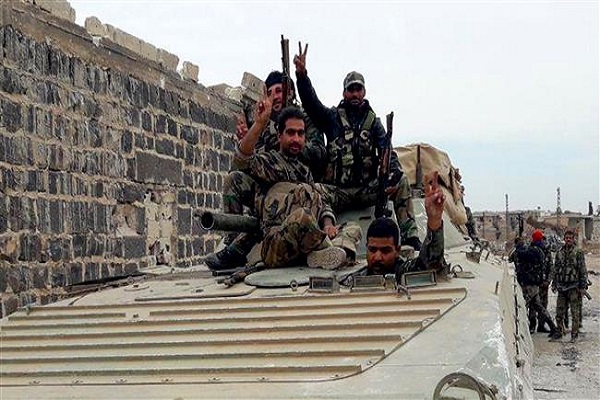 Syria’s official news agency SANA reported on Thursday that Syrian army troops and their allied forces had established control over the villages of Maar Dibsah, Khan al-Sabil, Joubas and Mardikh.

The report added that a number of militant positions were completely destroyed as Syrian army artillery units struck them.

SANA noted that government forces, while combing the liberated villages, found underground tunnels and trenches that terrorists used to carry.

On Wednesday, Syria's General Command of the Army and Armed Forces said in a statement that government forces were in full control of Ma'arrat al-Nu'man city, which lies 33 kilometers (21 miles) south of Idlib.

“Our armed forces continued operations in southern parts of Idlib with the aim of putting an end to crimes committed by terrorist groups, which continue to target safe zones, civilians and army posts with rockets and explosives,” the statement added, according to Press TV.

The statement also underlined that the Syrian army will continue to carry out its constitutional, national and moral duties to purge the last remnants of terror outfits from the entire Syrian soil.

Separately, Syrian army troopers and their allies captured a number of areas in the western countryside of Aleppo province.

Syria’s Ministry of Foreign Affairs and Expatriates wrote to the United Nations on January 25, stressing that the operation in Idlib and Aleppo against Takfiri elements "will not stop until the elimination of those terrorists, who threaten safety and security of Syrian civilians."

The Syrian army declared the start of an offensive against foreign-sponsored militants in Idlib on August 5 last year.

It came after those positioned in the de-escalation zone failed to honor a ceasefire brokered by Russia and Turkey and continued to target civilian neighborhoods.

Under the Sochi agreement, all militants in the demilitarized zone that surrounds Idlib, and also parts of the provinces of Aleppo and west-central province of Hama, were supposed to pull out heavy arms by October 17 2018, with the Takfiri groups having to withdraw two days earlier.