Culture
News ID: 3471536
TEHRAN (IQNA) – Officials from Argentina and Kazakestan gave inaugural messages in the opening ceremony of the 7th Science and Technology Exchange Program (STEP) forum on Thursday, May 28, which featured scientific efforts to fight the coronavirus. 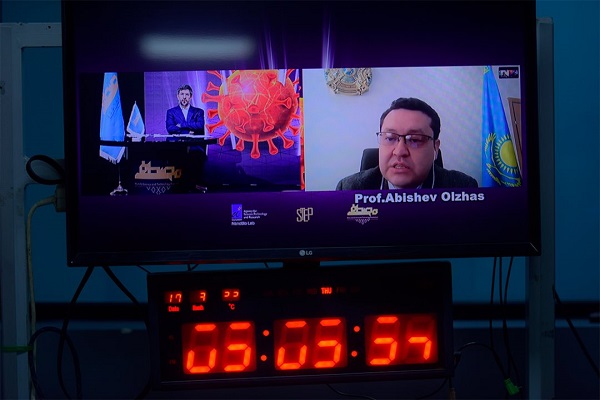 The event was held online by the Mustafa Science and Technology Foundation (MSTF). According to MSTF Media, Jorge Chediek, Director of the Secretary-General on South South Cooperation, said in his message, "We are putting together some of the best minds in the Islamic world to confront the challenges brought about by coronavirus," he stated.

He then commended the SETP event, stating "I look forward to success of this program and I hope this is a tool for all the countries of the world for a better future without this pandemic."

Further, Olzhas Abishov, Vice-Minister of Healthcare of the Republic of Kazakhstan gave a message on the Strategies and Experiences in Facing Coronavirus during the 7th STEP on May 28, 2020.

"Today, the fight is against COVID-19 pandemic and the elimination of it. Economic damage and irreparable loss of human life are the two major issues hitting all the countries around the world. We continue to take scientific measures to fight this pandemic," he said.

"In Kazakhstan, the intensity of the virus is significantly reduced due to timely diagnosis and treatment of patients. However, the government continues to enforce quarantine measures more than ever. Random testing among various populations is conducted to give a holistic view of the state of the infected population."

“This pandemic showed our strengths and weaknesses. It showed us where we need to make improvements,” he added.

He suggested "integrating COVID-9 health care to fight it in 2020."

He also named "digitalization of public health surveillance as a COVID-19 response to take timely actions in a short time."

"We believe that consolidation and solidarity are required to overcome this disease. We should work together and openly share expertise."

"STEP is a perfect example of scientific community’s endeavor to overcome the pandemic and establish a long-lasting network among Muslim scientists," he said.

“Only together we can win,” he concluded.

Also speaking at the event was Professor Ugur Sahin from Turkey who said COVID-19 vaccine candidate results to be released in June.

The 2019 Mustafa (PBUH) Prize laureate talked about an mRNA-based vaccine that he and his research team have developed which was recently tested on human beings.

"We are facing a pandemic the only solution to which is a vaccine. This pandemic will challenge us for the next two years."

Explaining the concept of mRNA vaccines, he said that "they deliver mRNA-encoded genetic information of the vaccine antigen to the cells in the body of the subject. It is particularly used in pandemics."

"mRNA vaccines can be designed and manufactured fast within weeks; they have intrinsic immune-stimulatory properties and do not require addition of adjuvants; they are highly immunogenic and induce neutralizing antibodies as well as T-cell responses. They are also well-characterized biopharmaceuticals with a high purity and are free of animal material," he added.

According to Sahin, the clinical trial protocol in Germany started April 23rd, 2020, with a target population of 200 healthy subjects aged 18 to 55. The objective of this was safety, tolerability, immunogenicity, in addition to determining the optimal dose for further studies."

He also announced that the first results of this study are expected by end of June/early July.

"We have started to increase our manufacturing. I'm confident this can be accomplished in the next three months and be distributed in large dose. Depending on the dose of the vaccine, we can serve larger populations of people," Sahin remarked.

He said: “we are trying to find a solution to allow free access of this vaccine to all with the cooperation of WHO.”