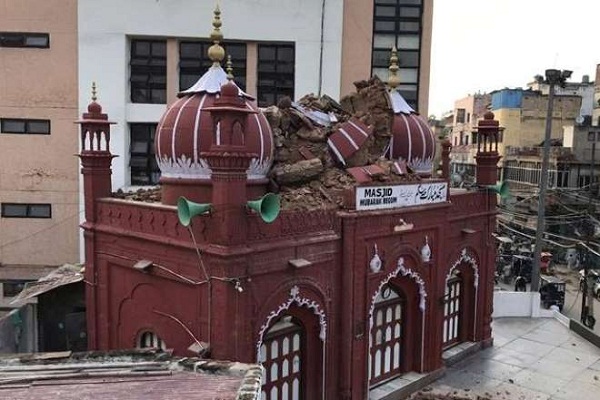 Of the three domes on the red sandstone mosque, the one in the center broke and turned to rubble. A muezzin of the mosque, Zahid, told The Indian Express, “Around 6.45 am, I was standing outside the mosque and it was pouring heavily. Suddenly lightning struck, and the dome in the center just broke. There were two-three devotees inside too. No one was hurt. We have locked it up and will submit an application for restoration to the Delhi Waqf Board on Monday.”

Himal Akhtar, member, Delhi Waqf Board, said that “an architect and junior engineer will be deployed Monday for inspection. We will conserve the mosque on a priority basis.”

The Delhi chapter of Archaeological Survey of India (ASI) said that the mosque doesn’t come under their jurisdiction.

It was in 1822 that Mubarak Begum, the senior-most partner of Sir David Ochterlony — the British resident of the Mughal Court — built the mosque in Hauz Qazi chowk, said author Rana Safvi.

“It was built by Mubarak Begum, who was a courtesan, and the senior-most wife of Sir David Ochterlony. It was built on the first floor and there were shops underneath it. This was usually the case with mosques built in busy bazaars as the ground floor was for shops. There are more such mosques in Delhi,” said city chronicler and author Sohail Hashmi.

Hashmi said that “living monuments” such as old mosques and temples where prayers happen are “not protected by the ASI”.

He added, “This needs to change as these are heritage structures which are being neglected. Proper maintenance is needed which bodies like ASI can do.”