General
News ID: 3472140
TEHRAN (IQNA) – Every year, the black silk that covers the Kaaba, in the holy city of Mecca, is replaced on the ninth day of the Islamic month of Dhul Hijjah. 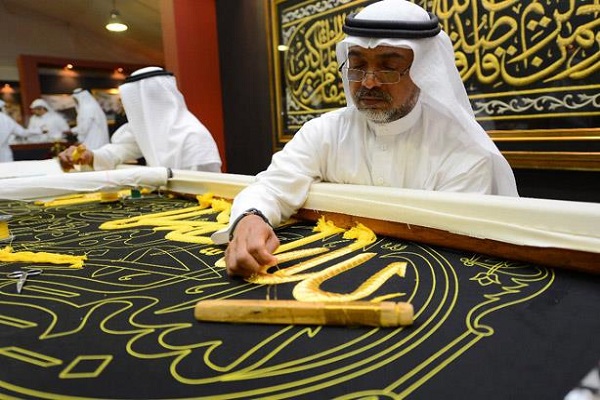 The tradition of changing of the Kaaba’s ‘kiswah’, the cloth that adorns the Kaaba made of black silk and embroidered with gold calligraphy, coincides with the departures of pilgrims from Mecca, to make their way to Mount Arafat.

The kiswah changing event is customarily attended by the gate-keepers of the Kaaba and technicians from the Kiswah Factory, which has been manufacturing the fabric that adorns the Kaaba for the past six decades. These technicians employ a special mobile escalator so as to remove the old cloth and cover it with the new kiswah, one day before the first day of Eid al-Adha.

Pilgrims visiting the holy Kaaba will see the cloth that has taken a whole year to complete at the hands of highly skilled professional tailors and artisans. The process by which the Kaaba is adorned in the new kiswah entails attaching special metal hooks (47 in total) to the roof of the Kaaba after which the ropes from the old kiswah are cut off so that the new cloth immediately falls above it to cover it. This is to avoid the Kaaba being exposed during the change.

In going with tradition, one-third of the cloth from the bottom is lifted up out of the reach of millions of pilgrims who might want to cut off a piece of the cloth to take with them. There is approximately two meters between the marble floor that surrounds the Kaaba and the beginning of the black kiswah.

Artisans at the Kiswah Factory are entitled with the embroidery of the belt, lamps and the curtain that drapes over the Kaaba door, in addition to the Quranic verses printed on the black cloth and other embellishments. They employ the necessary techniques, including stitching and padding and use silver- and gold-coated wires. This process consumes approximately 150 kilograms of gold and silver wire.

The ‘burqa’ (veil) that covers the Kaaba door is comprised of a piece of pure black silk that is 6.5 meters long and 3.5 meters wide; it is embellished with Quranic verses and Islamic designs in gold and silver thread. It is the technicians at the Kiswah Factory who are responsible for stitching the pieces that make up the whole gold and silver designs.

The final stage is hanging the curtain that covers the door and it is considered one of the most difficult stages in the process of changing the Kaaba’s kiswah. The next step entails lifting the Kaaba cover, which is padded by a thick white cloth that is raised above the marble floor that surrounds the Kaaba.

The old covering with all its related pieces is handed to the Saudi government, which it divides into smaller parts in accordance with particular considerations, and which it then bestows as gifts to senior guests, officials, a number of religious institutions, international institutions and Saudi embassies abroad.