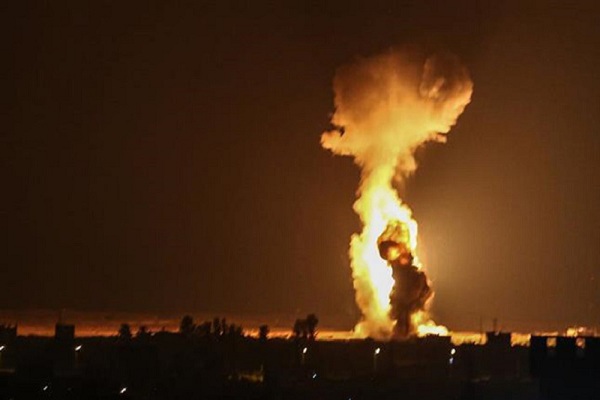 Earlier reports from Palestinian sources said an observation post near the camp of Bureij came under repeated attacks.

The fresh raids make for the fifth night the Israeli military is attacking Hamas targets in the coastal enclave in a row.

Israel claims the Saturday attacks were launched in retaliation for balloon bomb launches earlier in the day.

In retaliation for the Israeli raids, Palestinian groups launched rocket attacks against an Israeli settlement, leaving at least five injured.

Hamas had earlier vowed to step up its pressure on the Israeli military after two children were injured during Friday's night-time strikes in Gaza.

On Friday, Israel launched fresh aerial and ground attacks against targets across the besieged Gaza Strip, in the latest of a series of attacks carried out overnight this week.

The Israeli warplanes, helicopters and tanks once again bombed positions in the blockaded enclave, claiming that they were positions held by the Palestinian resistance movement of Hamas.

In a statement issued following the attacks, the Israeli military said that the raids were carried out in response to a number of alleged incendiary balloons sent from Gaza to the occupied territories, and targeted "naval force compound, underground infrastructure and observation posts" belonging to Hamas.

The Israeli regime every so often launches strikes against positions in the blockaded enclave, accusing the resistance groups there of launching rockets.