General
News ID: 3472450
TEHRAN (IQNA) – Sudan said Wednesday that government and rebel leaders had met to begin implementing a deal that aims to end a war in which hundreds of thousands of people were killed. 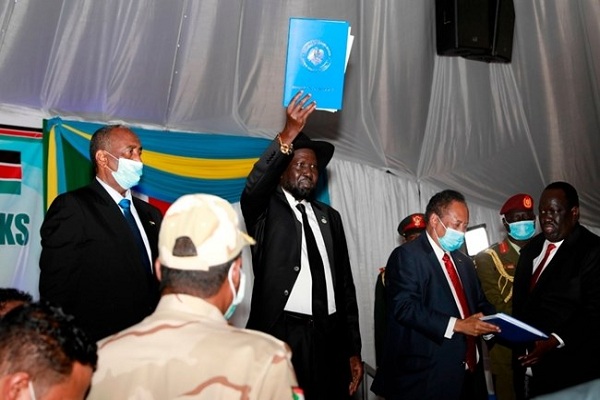 "This was the first joint meeting after the inking of the accord," said Alhadi Idris, the head of the SRF rebel coalition, SUNA reported.

"We discussed in this meeting what will happen going forward," Idris said, adding that there were "still issues related to the timeline to implement the deal".

The SRF, founded in 2011, is an alliance of five armed rebel groups and four political movements from the vast western region of Darfur, and the southern states of South Kordofan and Blue Nile.

"Our priorities now are economic progress and humanitarian issues related to people displaced by the conflicts," said Minni Minawi, who leads a faction of the Darfur-based Sudan Liberation Movement, AFP reported.

Monday's peace deal covers issues around security, land ownership, transitional justice, power sharing and the return of people who fled their homes because of fighting.

It also provides for the dismantling of rebel forces and the integration of the fighters into the national army.

Sudan's transitional government, which took power after the April 2019 ouster of hardline leader Omar al-Bashir, has made forging peace with rebel groups a priority.

Bashir is wanted by the International Criminal Court (ICC) on charges of genocide and crimes against humanity in the Darfur conflict, where fighting killed 300,000 people and displaced 2.5 million others, according to the UN.

The former president, who is in jail in Khartoum convicted of corruption, is now on trial for the 1989 coup in which he grabbed power.

Sudan's rebels are largely drawn from non-Arab minority groups that long railed against Arab domination of the government in Khartoum under Bashir.

Prime Minister Abdalla Hamdok said on Tuesday that the deal "creates a new Sudanese state, and remedies all injustices of the past", as he appealed to two rebel holdout movements who refused to take part.

Previous peace accords in Sudan, including one signed in Nigeria in 2006 and another signed in Qatar in 2010, have fallen through.