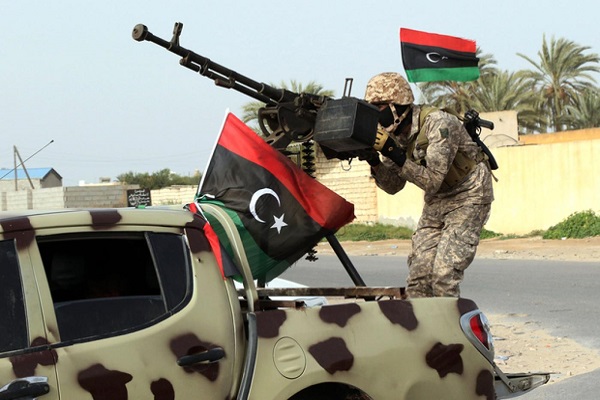 The panel of experts monitoring sanctions against Libya said in the report seen Tuesday by Associated Press that 11 companies also violated the arms embargo including the Wagner Group, a private Russian security company the panel said in May provided between 800 and 1,200 mercenaries to support eastern Libya’s rebel commander Khalifa Haftar.

In addition, the panel of experts said the warring parties and their international backers failed to inspect aircraft or vessels or both, as required by a 2015 UN Security Council resolution if they have reasonable grounds to believe the cargo contains military weapons and ammunition.

"The panel considers that details in letters to certain member states, together with extensive media coverage, provides sufficient information for them to have reasonable grounds for inspection," the report said.

The new report follows a warning last week from the top UN official for Libya that the oil-rich country is at "a decisive turning point," with foreign backers of its rival governments pouring in weapons and the misery of its people compounded by the coronavirus pandemic that appears to be "spiraling out of control."

Acting special representative Stephanie Williams told the Security Council that its actions "will help determine whether the country descends into new depths of fragmentation and chaos, or progresses towards a more prosperous future."

Libya was plunged into chaos when a NATO-backed uprising in 2011 toppled longtime dictator Muammar Gaddafi, who was later killed. The county has since split between rival east- and west-based administrations, each backed by armed groups and foreign governments.

Eastern military commander Haftar launched an offensive in April 2019 trying to capture the capital of Tripoli. But Haftar’s campaign collapsed in June when militias backing the UN-supported government in Tripoli, with Turkish support, gained the upper hand, driving his forces from the outskirts of the capital and other western towns.

Haftar is supported by the United Arab Emirates, Russia, Jordan and Egypt while the Tripoli forces are supported by the wealthy Persian Gulf state Qatar and by Turkey, which is a bitter rival of Egypt and the UAE in a broader regional struggle.

The panel of experts said that "since the more direct engagement by Turkey in 2019 and the United Arab Emirates in January 2020 arms transfers to Libya by those two member states have been extensive, blatant and with complete disregard to the sanctions measures."

"The panel thus finds that Turkey and the United Arab Emirates were in repeated non-compliance" with the arms embargo, which has been in force since 2011, the report said.

The panel said the UAE deployed military personnel and transferred at least five types of military equipment into Libya including armored personnel carriers and patrol vehicles and a French Dassault Mirage 2000-9 jet fighter.

Russia transferred at least two types of military equipment into Libya, pointing to a Mig-29A fighter jet operating at the Al Jufra airbase on May 18 and a Sukhoi SU-24 supersonic attack aircraft operating from both Al Jufra and Al Khadim airbases on the same day as well as "a main battle tank upgrade" for an unidentified Russian private military company.

Wagner military operatives also took part in the withdrawal of Haftar’s forces from Bani Walid on May 27, the panel said, and on July 1, its operatives were reported to be based at five airbases - Al Jufra, Brak, Ghardabiya, Sabha and Wadden - and at the Sharara oil facility, the country’s largest.

The 10 other companies accused by the panel of violating the arms embargo by providing logistical support for Haftar’s forces include airlines from Kazakhstan, Ukraine and Tajikistan and two UAE companies.

As for shipments by sea, the panel confirmed that five vessels destined for government ports flying flags of Albania, Lebanon, Tanzania and Panama were in "non-compliance" with the arms embargo along with two destined for Haftar’s eastern ports. One flying a Liberian flag has a UAE owner and the other flying a Bahamas flag has a Japanese owner, it said.