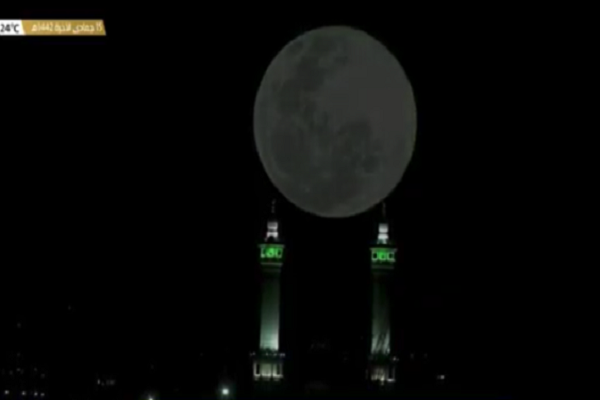 The occurrence was witnessed by those in the vicinity of the mosque during the first hour of Friday.

"This will be followed by the moon’s alignment with the Kaaba at 12:43:35 a.m. KSA time, or 09:43:34 GMT, at an altitude of 89.57.46 degrees," Majed Abu Zahira, president of the Jeddah Astronomy Association, wrote on Instagram. "The moon’s disc will be fully illuminated at 99.9 percent at a distance of 381.125 kilometers from Earth. It will then remain visible for the rest of the night until it sets with the rise of the sun on Friday," he added, according to Arab News.

Located at the center of the Grand Mosque in Islam's holiest city, the Kaaba is the direction to which Muslims across the world pray.

Because of the alignment ascertaining this direction is easy for sky watching enthusiasts.

"The moon will guide them towards Mecca with an accuracy that matches that of smart phone applications," Abu Zahira states.

The cube-like structure, which is draped in a black cloth, is believed by Muslims to have been built by Prophet Ibraheem (Abraham) and his son Ismaeel.