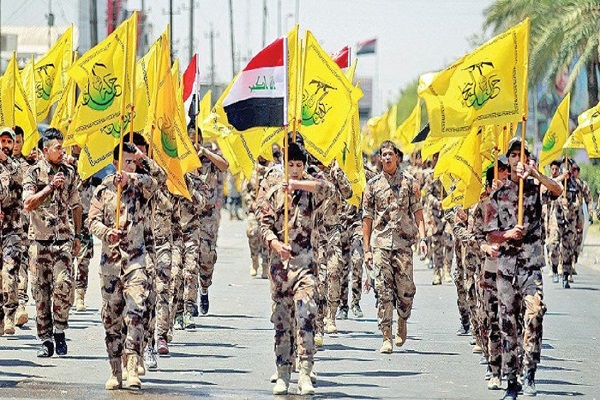 According to the Communication and Media Affairs Centre of al-‎Nujaba in Iran‎, on the anniversary of the issuance of the Jihad al-kifai (collective Jihad) fatwa by the Iraqi supreme religious authority and the formation of the PMU, al-Nujaba issued a statement commemorating this great event in contemporary history, saying, “After one hundred years, the sons of the Great Iraqi Revolution of 1920 once again rose from central and southern Iraq and the young and old responded to the call of the religious authority to defend the sanctities and to engage in jihad against disbelief and tyranny, creating an unprecedented stand.”

The statement called the Jihad al-kifai fatwa and the establishment of the Popular Mobilization Forces “the shaky myth of the fortresses of the arrogant powers,” which deserves to be considered a national holiday in Iraq.

The al-Nujaba Islamic Resistance Movement recalled the daily killings, mass graves and the pervasiveness of insecurity in the days of helplessness for the Iraqi people and emphasized, “The birth of the Popular Mobilization Forces and its victories changed the balance of power.”

The statement goes on to state, “In the al-Nujaba Islamic Resistance Movement, we consider the existence of the Popular Mobilization Forces as a necessity for the survival of the majority of the nation, just like water and air, because no wise person wants to go back to the dark past, in which his blood is allowed to satisfy the [desires of the] greedy and the profiteers.”

The al-Nujaba Movement described any intention to confront the Popular Mobilization Forces or to marginalize and transform this popular institution as an “impossible illusion” and added, “The Popular Mobilization Forces have never been sectarian. It is as if the blood of the Shia youth of central and southern Iraq was shed in defense of their compatriot brothers of Sunnis, Christians, Yazidis and Kurds. They freed Iraqi women from captivity and restored their dignity, avenged them, and the noses of Daesh, the United States, the Zionists and the arrogant forces were rubbed in the dirt of humiliation.”

At the end of its statement, the al-Nujaba Islamic Resistance Movement greeted the noble souls of the martyrs of the Popular Mobilization Forces and the security forces, especially the great commanders of victory, the martyrs [Qassem] Soleimani and [Abu Mahdi] al-Muhandis, as well as the fighters of the Popular Mobilization Forces and the supporters of this holy institution and promised to destroy the enemies, occupiers, mercenaries and remnants of the Ba’ath Party.”