Culture
The link was copied
News ID: 3475312
TEHRAN (IQNA) – The first session of an “International Intensive Academic Course on Shia Studies” was held on Monday, July 12, with a lecture by Dr Najam Haidar, a professor at the Faculty of Religions at Barnard College, Columbia University. 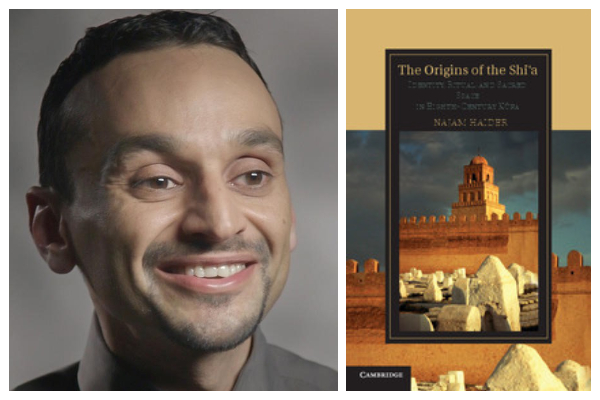 The Hikmat International Institute has organized the academic course.

Dr Najam Haidar received his PhD in 2007 from Princeton University. His research has been on the history of the early and contemporary centuries of Islam with emphasis on the impact of colonialism and modernity on political and religious discourse in the Islamic world and is interested in the history of Islam, Islamic jurisprudence and Shiism. In 2011, he published a book, "The Origins of the Shi’a", Cambridge University Press. Also in his other book entitled "Shia Islam" he dealt with the three branches of Zaydi, Shia 12 Imami and Ismaili.

Following are excerpts from his lecture:

My background is in early Islam and as many of you will know there are issues associated with study of early Islam and those issues center on the sources themselves. We don’t have very many sources and the ones we have are very controversial with respect to their authenticity and people are not quite sure what to do with them. So one of the central questions of early Islam is how to deal with the propensity of the problematic source material and how to go through it to construct an idea of what happened early.

The second view states that Abdullah ibn Saba, a Jew in Mecca, was the originator of Shiism. Proponents of this theory believe that Shiism interrupted the golden age of Islam. This view has no scientific justification or credibility, and even the historical existence of this person is not proven to us.

There is a third view that believes that Shiism has been prevalent in Iran since the Safavid period and in fact was formed in the 15th century. They believe that until Safavid times, there was no difference between Shias and Sunnis and there was no such thing as Shias and Sunnis, and it was after this period that the two groups became distinct.

Let's talk about information that is historically proven and we are sure of. In the first century after the death of the Prophet (PBUH), there was a group of people who had a special loyalty to Imam Ali (AS).

During this period, the first caliph Abu Bakr and the second caliph Umar ibn al-Khattab introduced a political system based on the principle called "Sabqa". Sabqa meant to be a pioneer in converting to Islam. They suggested that if a person believed in the Prophet earlier, he would be more qualified to lead the Islamic society; Omar emphasized this system more than Abu Bakr.

In addition, during this period there was a system within the tribes that if a person held a higher position in the tribe, he would have a higher priority to obtain high positions.

In Omar's lifetime, people who had converted to Islam earlier were given priority, and the status of individuals in their tribes was ignored. But Uthman overturned this method and gave superiority to the tribal status of individuals. For this reason, some people became enemies of Uthman.

Shia sources say that Uthman ruled for 12 years, of which 6 years were good and 6 years were bad. Uthman was from the tribe of Umayyids. He was considered an influential member of the Ummayids and converted to Islam earlier than any other member of the tribe.

Uthman abolished the system of precedence that was prevalent at the time and gave priority to the class and tribal position. He brought tribal leaders to power. Those who did not have a prominent position before but converted to Islam earlier than others could rule a region during Omar's era, but Uthman changed that, replacing those who believed much later because of their class status.

This situation hurt most non-Arab Muslims, who had no tribal status. Therefore, those who had a longer history in Islam and those who were non-Arabs and who were called pious or Qaris (The Quran reciters) were affected by this situation.

There is a theory that those who opposed the status quo were called Shias, and the Umayyads and the supporters of Uthman’s rule were called Sunnis, but this is not true because among the opponents of the third caliph, there were various groups, including the Kharijites. Therefore, the Sunnis are not equal to the Umayyads, and not all opponents of the third caliph can be called Shias.

A group of these people called pious people killed Uthman in 35 AH. Then Ali ibn Abi Talib (AS) succeeded Uthman.

After Ali (AS), his son, Hassan (AS) and then Hussein (AS) succeeded him, who played a key role in the formation of Shiism. Gradually the concept of Wilayah was formed; Wilayah was a kind of special loyalty of a group of pious people towards Imam Ali (AS), and this concept was only for that Imam.

These people were upset that Imam Ali (as) did not succeed the Prophet. They were a very small group that supported Imam Al. Imam Ali did not pay attention to the tribal status of individuals, but advocated the superiority of individuals based on piety and asceticism.

The pious considered Ali as their hero. However, the group called "Shia of Ali" was a very small number of people who had pledged allegiance to Imam Ali and it is thought that this group also disappeared after the death of Imam Ali.

If you ask me what Shiism meant in the first century, I would say that the loyalty of very few people to Imam Ali at this time, formed the Shias. From the second century, the concept of Wilayah expanded and was extended from Imam Ali to his children and took an official form.

In the book "Sunan al-Darimi", which was a non-Shia writer, it is stated that in the first century, a person could be intellectually identified depending on the way he prayed. According to some sources, in the second century, the way people dressed and prayed were different. Even their ablutions were different.

There is a third-century text by a Shia author who describes some mosques in Kufa as good and some as bad, in which prayers were recited differently. For example, in some mosques, worshipers were reciting Qunut and in others they did't.

Some did not read.

During this period, people were divided into Shias and non-Shias, and there was no Islamic school called Sunni. In the second century, Shias had a different form of worship. At this time, the concept of pilgrimage was created and the pilgrimage to the shrine of Imam Hussein (AS) became part of the identity of Shias.

The formation of Shia theology and the theory of Imamate

Gradually, the Shia kalam (Theology) was formed. Questions arose about the quality of formation of the world, the proof of God's existence, the subject of God's predestination and knowledge, to which theologians gave different answers.

Until the fifth century, some Mu'tazilite beliefs entered Shia theology and jurisprudence and the theory of Imamate was formed. The concept of God's justice was one of the main concepts of the Mu'tazilites. Justice means that everything God does is based on justice, and this concept entered the Shia theology. Belief in the "infallibility" of the Imams arose because the Imam must be the interpreter of the word of God and must interpret the word of God correctly.

In the end, I have to say that as a historian, I look at this process from a historical perspective. One who is interested in other scientific fields may approach to the origin of Shiism with a theological or philosophical perspective.

Quebec Mosque Attack Commemoration to Be Held in Prayer Room