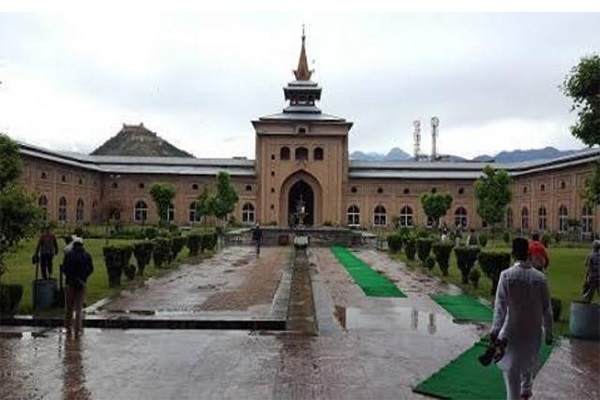 Earlier, Auqaf of Jamia Masjid had announced that Friday prayers will be offered after getting a green signal from administration.

However, Friday prayers were again suspended at the historic mosque following an advisory by the administration limiting gatherings to 25 people.

Eyewitnesses said that the prayers were not offered as authorities had locked the main gate of the mosque with armed forces personnel deployed in front of it.

The Anjuman Awqaf Jamia Masjid lamented that despite the fact that the worshippers were fully adhering to COVID-19 SOPs, the prayers at the largest place of worship in Kashmir were not being allowed for the last many Fridays.

In a statement, the Awqaf said, when employees opened up the gates of the mosque police personnel forced them to close all the gates and no namazis (worshippers) were allowed inside the mosque for offering the Friday prayers.

"A large group of namazis, including women, who had gathered outside the mosque protested what they termed as an 'authoritarian move' and demanded that they be allowed to go inside the mosque to offer prayers, but to no avail," reads the statement.

"It is extremely unfortunate and disdainful of the authorities to disallow Muslims of the valley from praying at the Central mosque by use of brute force and cause then hurt and grief. Muslims of the valley denounce this injustice and interference in religious freedom in strongest terms", Awqaf said.

Earlier, shrines and mosques were shut due to the rise in COVID-19 cases in the valley. However, the congregational prayers were allowed at Jamia Masjid after four months as it had remained off-limits for prayers due to the second wave of the COVID-19 pandemic.

Meanwhile, people alleged that the 'dual policy' adopted by administration is confusing as on the one hand it has closed places of worship and are yet to reopen educational institutions while on the other hand, tourist resorts are open and the administration and political parties are holding functions, sports tournaments and other Melas in the valley.

“It’s ironic that on one hand all concerns regarding COVID are being ignored when it comes to asking people to participate in official functions while restrictions are being imposed on Friday prayers and worship in central mosques, shrines and imambaras where COVID SOPs are being fully followed,” one of the devotees said.

“If you go to any tourist resort on weekdays or weekends, you will see most of the people roaming around without adhering to any COVID guidelines,” he added.

Various political parties have asked for immediate opening of all the religious places including Dargah Hazratbal and Jamia Masjid Srinagar.