General
The link was copied
News ID: 3476135
TEHRAN (IQNA) – A Pakistani Sunni cleric hailed Iran for holding conference like the International Unity Conference, saying it is great service to the Muslim world. 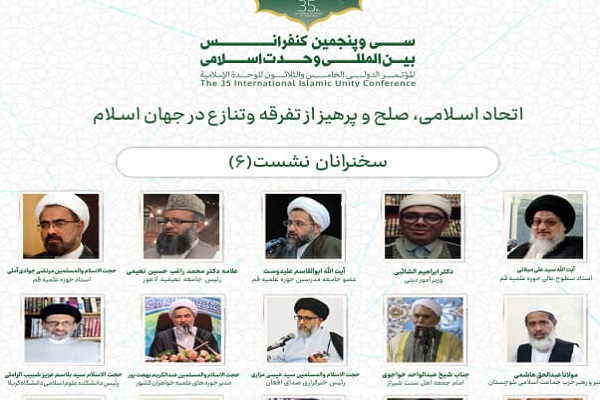 Addressing the 6th webinar of the 35th International Conference on Islamic Unity, President of Pakistan’s Jamaat-e-Islami Balochistan Maulana Abdul Haq Hashmi said the conference is a special opportunity for promoting the message unity and solidarity to Muslim countries.

He recalled the efforts of Sunni and Shia scholars like Sheikh Hassan al-Bana, Sheikh Mohammad Taqi Qomi, Sheikh Shaltut, and others to enhance Islamic unity and said that after the victory of the Islamic Revolution in Iran, Imam Khomeini (RA) and later Leader of the Islamic revolution Ayatollah Seyed Ali Khamenei followed this path and safeguarded it.

He described holding the conference as a great service to the Muslim Ummah as it is a venue for followers and scholars of different Islamic schools of thought to interact and exchange views.

Just war and just peace, Palestine and Islamic resistance, Islamic fraternity and countering terrorism; mutual respect among Islamic schools of thought; and Ummah Wahida (united community) and a union of Islamic countries will be among the subjects of discussion.