General
The link was copied
News ID: 3476170
TEHRAN (IQNA) – The 35th edition of the International Conference on Islamic Unity concluded in a ceremony here in the Iranian capital on Saturday evening. 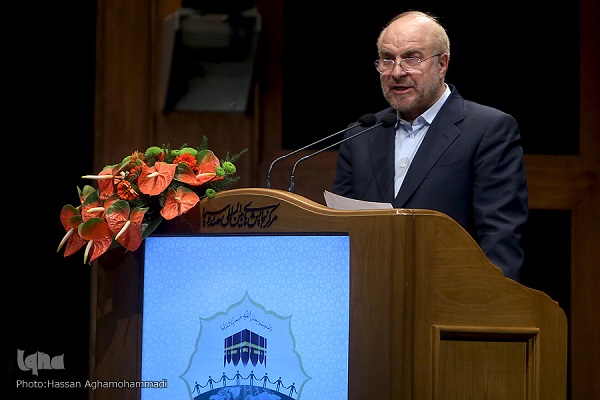 In his address, Ghalibaf highlighted the role of Muslim world elites in promoting unity and said they should make the Muslim Ummah aware that based on the teachings of the Quran, the main vice that must be countered is global injustice and arrogance via wisdom and rationality.

He also called for comprehensive dialogue and exchange of views among Islamic countries to enhance Muslim unity and counter Takfir, discord and division.

Elsewhere in his remarks, Ghalibaf warned of a plot hatched by the United States to ignite the flames of war in the region.

The official said American troops may have apparently withdrawn from the region, but they are still planning to create unrest in this part of the world.

Ghalibaf went on to say that the issue of Palestine has united the Islamic Ummah and formed a united resistance front against the “usurping Zionist regime”.

Another speaker at the ceremony was Secretary General of the World Forum for Proximity of Islamic Schools of Thought Hojat-ol-Islam Hamid Shahriari who gave a report about organizing the 35th edition of the conference.

He said some 300 scholars, thinkers and political and religious figures addressed the conference in person or via video call.

This year’s conference began in Tehran on Tuesday with a speech by Iranian President Ebrahim Raeisi.

“Islamic Empathy and Sympathy and Avoidance of Tensions and Conflicts” was one of the main themes of the conference.

Just war and just peace, Palestine and Islamic resistance, Islamic fraternity and countering terrorism; mutual respect among Islamic schools of thought; and Ummah Wahida (united community) and a union of Islamic countries were among the subjects of discussion.