First Muslim Mayor of Michigan’s Dearborn Sworn In on Quran

General
News ID: 3477391
TEHRAN (IQNA) – Placing his left hand on a family Quran, Abdullah Hammoud was sworn in as the first Muslim mayor of Dearborn, US state of Michigan, in a historic moment for the city. 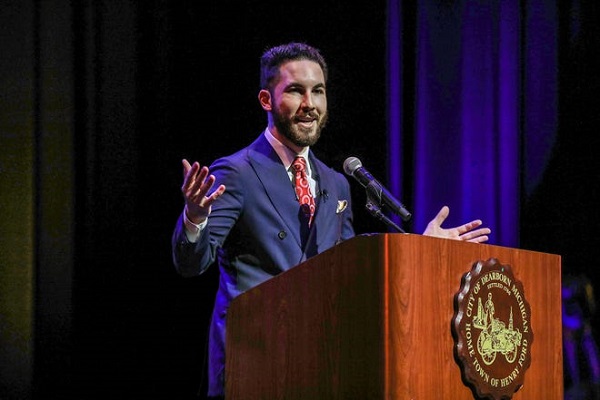 Addressing the audience afterward, Hammoud spoke of Dearborn's diversity, saying it serves as a democratic model for the world.

And he called for a dynamic government that is accessible to all while solving the city's challenges, such as infrastructure.

"All four corners of our city bring something special that makes Dearborn the rich and vibrant place we all love and call home," Hammoud said onstage at the Ford Community & Performing Arts Center. "Together, we’re on a mission to prove that we can solve the biggest problems we face while being transparent, responsive and accessible to all. Our new team brings not only vast experience, but historic diversity that includes several broken barriers. ... By including more of us, we widen our perspectives, we improve our decision-making, and multiply our impact. No matter your background, ZIP code, or native tongue, the city of Dearborn will always treat you equitably and strive to earn your trust each and every day."

Hammoud is Dearborn's first Arab American mayor of a city of 110,000 residents that was once led for decades by one of the region's most notorious racists, Orville Hubbard, a former mayor who used disparaging language against minorities, including Black and Arab American people.

Hammoud is also the city's first Muslim mayor, using some Arabic words to thank God during his speech. Dearborn, the headquarters for Ford Motor Co. and whose logo is "Home Town of Henry Ford," is now 47% Arab American and white people are now a minority, according to 2019 census data.

"Over the decades, we have served as the birthplace of innovation, and the gateway to opportunity for tens of thousands of families," Hammoud said, referring to Dearborn and how Ford plants drew workers from around the nation and world. "We’ve modeled for the world what a multiethnic democracy can look like when we approach our differences with kind curiosity rather than suspicion. But in assuming this office, we won’t just inherit a shared past. We also inherit responsibility for the future. Dearborn is bigger than all of us, and as we prepare to tackle hundred-year challenges such as catastrophic flooding, we will think not just about our residents today, but also the residents of tomorrow."

Three religious leaders - a Shia Muslim, Sunni Muslim and Christian - gave invocations, appearing on stage together in a show of unity.

One of the leaders who spoke was Shaikh Ahmad Hammoud, an imam at the Islamic Center of America in Dearborn who is an uncle to Hammoud. The other Muslim leader was Imam Suleiman Hani of the AlMaghrib Institute.  The Rev. Terri Pilarski of Christ Episcopal Church in Dearborn prayed for the city to be a light for others to follow.

The seven members of Dearborn's City Council, nine members of the Dearborn Charter Commission, and Dearborn City Clerk George Darany were also sworn in. The seven council members and Darany all spoke after being sworn in by Wayne County Circuit Judge Helal Farhat. All of the elected officials, including Hammoud, officially took office on Jan. 1.

City Council President Michael Sareini said he will work to be "an active leader ... seeking solutions."

Sareini said residents have been frustrated with inefficient city services.

The "quality of life must improve" in Dearborn, he said.

Councilman Ken Paris called upon residents to get involved with the city.

Darany also urged residents to get active: "If you want to see a change in your world, you might have to be the one to make that change yourself."

Several of the council candidates spoke about the problem of flooding, which has been an ongoing problem, especially last summer.

The crowd of about 100 people inside the auditorium was small because the city closed the event to the general public due to spike in COVID-19 cases this month, but the event was livestreamed online. Most of the guests were family or friends of the elected officials.

Abed Hammoud, a Dearborn attorney and former federal and county prosecutor who ran for mayor 21 years ago, attended the event along with his family. His son, Mustapha Hammoud, was elected to City Council and was sworn in.

Abed Hammoud said he had tears as he watched the inauguration. When Hammoud ran for Dearborn mayor in 2001, primary day fell on Sept. 11, the day of the terrorist attacks; he advanced to the general election in November, losing to Mayor Michael Guido.

"This is the moment we've been looking forward to for so long," Abed Hammoud said after the inauguration.

While Dearborn has been diverse for decades, "we didn't feel that its government represented its diversity," Hammoud said. "And today, you felt it. ... It feels like all the work we've done for many years has come to fruition. The city is going to be very happy to see how much talent this community has."

The city now has 11 elected officials, including in its school district, who are Arab American.

Councilman Hammoud said after being sworn in "I'm excited to work ... as a voice for accountability, ethics, and equal treatment for all residents. For the next four years, I want you, the citizens of this city, to watch my work and tell me how to best serve you.

"I feel incredibly honored to give back to this city who has given me so much," Hammoud said.

Abdullah Hammoud took the stage Saturday along with his wife, Dr. Fatima Beydoun. In his opening remarks, Hammoud thanked his family, including their newborn daughter and his late brother, Ali Hammoud, who died in 2015 from a seizure.

Hammoud said after the ceremony that the red tie he wore was his brother's tie and the Quran he took his oath on was gifted to his family after Ali's death.

"My brother is the greatest person I've ever ... known and will every know," he said. "I carry him wherever I go."

Hammoud started his address by referring to the late US Rep. John Dingell, the longtime congressman representing Dearborn.

"As I think about the work ahead of us, I remember the words of the late Congressman John Dingell in his final address to the public. He said, 'Elected officials do not have power. They hold power — in trust for the people who elected them.'" Hammoud said. "Everything we do will begin with that basic truth, that the people of Dearborn have ultimate power, that their trust must be earned rather than granted. Having devoted my life to public service, I know that there is more wisdom in the public we serve than any elected official can dream of."

Hammoud ended his speech by saying "Wa Salaam u alaykum" in Arabic, which refers to greetings of peace, followed by "Let's get to work."