Culture
News ID: 3477527
TEHRAN (IQNA) – The eights round of religious dialogue between Iran and Austria will be held later this year, the head of the Islamic Culture and Relations Organization (ICOR) said. 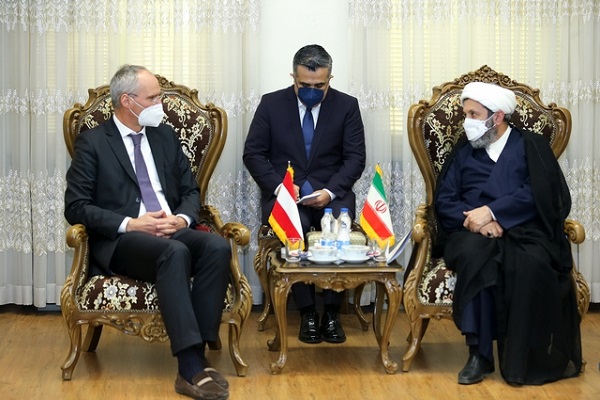 In a meeting with Austrian Ambassador to Iran Wolf Dietrich Heim, held at ICRO on Monday, Hojat-ol-Islam Mohammad Mehdi Imanipour said dialogue and exchange of thoughts promotes peace in the world.

He voiced Iran’s readiness to develop religious and cultural dialogue with Austria, saying it will help the two nations know one another better, which will in turn lead to enhancement of cooperation between the two countries.

Hojat-ol-Islam Imanipour also stressed the need for more interaction among Iranian and Austrian academics and elites who should play their role in promoting bilateral cooperation in scholarly, cultural and economic fields.

The Austrian envoy, for his part, expressed hope that his country would host the next round of interfaith dialogue with Iran in the current year.

“We are willing to expand interaction with Iranian thinkers, scholars and academic elites,” he added.

Wolf Dietrich Heim also highlighted the strong cultural bonds between the two nations and voiced the Austrian government’s readiness to cooperate with the Islamic Culture and Relations Organization in various cultural, art and scholarly areas.