Culture
News ID: 3478237
TEHRAN (IQNA) – Belief in Tawhid (monotheism) is the way to the accomplishment of sustainable peace, which is one of the main principles emphasized in divine faiths. 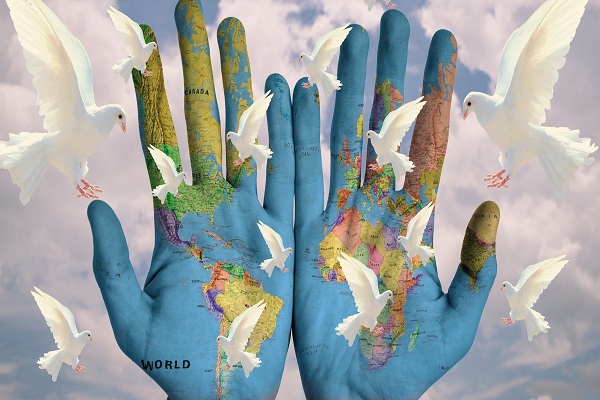 Senior Shia scholar Ayatollah Seyed Mostafa Mohaqeq Damad in an article has highlighted the teachings of the Quran on peace. Following are excerpts from his article:

If one studies the Quran and other Islamic sources, he would immediately recognize not only that Islam favors peace and has introduced peace as the best and most beautiful concept, but also that the religion, by teaching and establishing very important pillars, was a creator of peace in human society when it emerged.

The first pillar is Tawhid. Tawhid began with Ibrahim (Abraham) and was not innovated by Prophet Muhammad (PBUH), but Khajeh Nasireddin Toosi (the most prominent Iranian scholar in the 13th century) says in his book “Awsaf al-Ashraf” (The Attributes of the Noble) that in the Quran, Tawhid has two meanings: saying one and becoming one.

Wars, undoubtedly, have different causes, but one of the main causes of wars is wars of gods and for gods. Whereas our God has called Himself Salam (peace) and said that enmity (among human beings) is the objective of Satan. “Satan seeks to stir up enmity and hatred among you.” (Surah Al-Ma’ida, verse 91)

God has invited us to strive for friendship and kindness.

Another pillar is fraternity. It is one of the gifts of the Noble Quran. Ibn Khaldun, who was a 14-century Muslim socialist and is known as the father of sociology, has said that the Holy Prophet (PBUH) had two miracles: one is the Quran and the other is establishing friendship and peace among tribes at that time.

The Quran says in this regard: “And hold fast to the Bond of Allah, together, and do not scatter. Remember the Favor of Allah bestowed upon you when you were enemies, and how He united your hearts, so that by His Favor you became brothers. And how He saved you from the Pit of Fire when you were on the brink of it. And so Allah makes plain to you His verses, in order that you will be guided.” (Surah Al Imran, verse 103)

Based on this verse, sustainable and constant peace is achievable via belief in Tawhid. Another point in this verse is that one should always pay attention to the importance of the blessing of peace and reaching fraternity. The Quran says that if you are not thankful for fraternity, you’ll move to the brink of the pit of fire.

The Quran underlines human fraternity when it says: “People, We have created you from a male and a female, …”, so you are all brothers, whether you are a disbeliever or a Muslim, white or black, Arab or non-Arab, woman or man.

The third pillar is the institution of covenant. Covenant is the basis of social life. It is through covenant that the foundation of family takes shape. The Quran calls family covenant a Misaq ()covenant): “… and they have taken from you a strong covenant!”

It is through covenant that family is formed, government is formatted and nations live together in peace.

Another pillar is human dignity, which, among divine books, has been mentioned in the Quran for the first time. “We have honored the children of Adam and carried them on both land and sea. We have provided them with good things and greatly preferred them above much of Our creation.” (Surah Al-Isra, verse 70)

This is among the novel teachings of the Quran when it says you should avoid quarrels because it will undermine your dignity and honor: “Obey God and His Messenger. Do not quarrel with each other lest you fail or lose honor. Exercise patience; God is with those who have patience.” (Surah Anfal, verse 46)

The fifth pillar is forgiveness: “And if you pardon it is nearer to Taqwa (God-fearing, piety).” (Surah Al-Baqarah, verse 237)