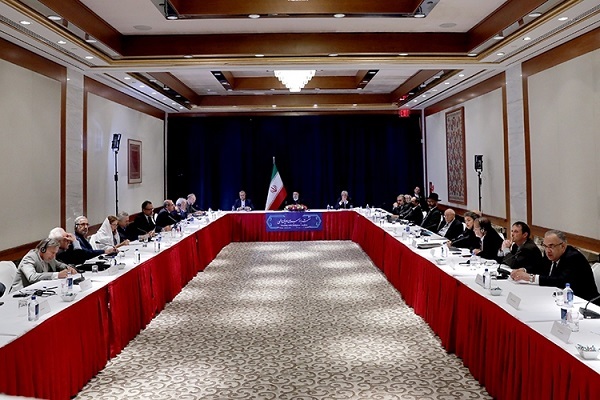 On Tuesday evening local time, continuing the plans for the second day of his trip to New York, Raeisi had a meeting with the leaders of the divine religions.

In his address, he said that the common point of all of us followers of the divine religions is worshipping God, adding, "Let's put attention to God as a common principle of divine religions".

Stating that all believers in divine religions agree on the point that a society without God and belief in the origin and resurrection creates destruction for mankind, not growth and prosperity, he added, "Humanity faces two bloody and catastrophic world wars and 70 years of oppression of the Palestinian people as a part of the examples of excluding God from the field of society administration, so it is necessary to consider the belief in God alongside all decision-making".

Raeisi stated that the right to social life does not mean that someone has the right to impose his personal wishes and perceptions on others, and pointed out, "Domination is one of the manifestations of atheism, which deprives other people of the opportunity to think".

The president described monotheism and justice as two pillars emphasized and accepted by all divine religions, and said, "It is in the light of justice that man can live a healthy, safe and easy life. According to Imam Muhammad Baqir (AS), when a person has correctly adjusted his relationship with himself, with God, with others, with existence and nature, he can be on the path to perfection".

The Iranian president considered the conflict between divine religions as the cause of the erosion of religions and the spread of atheism in societies, and noted, "Instead of conflict and elimination, we should propose and establish an intellectual dialogue between religions, so that the opinions of the followers of different religions can become closer with each other".

Raeisi added, "If we want generations to be inclined towards religion, we must be sensitive to oppression and violation of human rights".

Referring to the huge and unique Arbaeen march, the president said, "This march commemorates the symbol of oppression and standing against oppression, a symbol that showed humanity that if there is silence in the face of oppression, corruption and oppression will cover the whole society".

At the end of his speech, Raeisi announced the readiness of the Islamic Republic to host a meeting of dialogue among divine religions and said, "I also suggest that you continue holding these meetings as an opportunity for mutual thinking and synergy to solve the problems and knots of contemporary human life".