General
The link was copied
News ID: 3480696
TEHRAN (IQNA) – Bahraini activists held rallies in different parts of the Persian Gulf Arab country to call for the release of a prominent cleric. 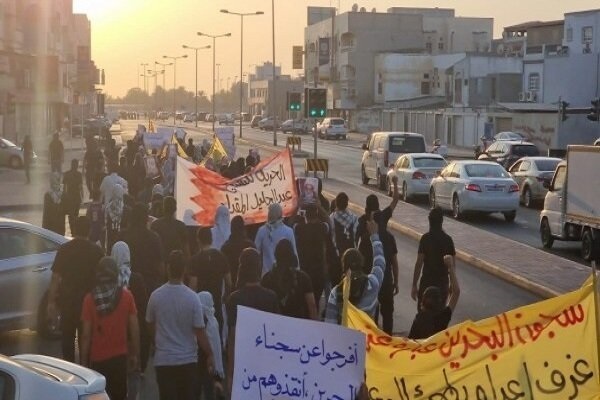 The rallies were organized in places like al-Sinabis, eastern island of Sitra, and al-Ma’amir, as well as other parts of the country.

Miqdad, a political detainee and a leading Shia cleric was assaulted at Bahrain’s notorious Jau Prison en route to a medical appointment, as the Manama regime keeps up harassment of imprisoned political dissidents.

The 62-year-old is the founder of a Shia opposition political group in Bahrain. He has been in prison for 11 years and is serving a life sentence for his role in the 2011 uprising.

He was due to be transferred out of the notorious Jau Prison last week for an external medical appointment. Still, before the transfer he was told that a doctor would not be present, Miqdad recounted in a phone call with Sayed Ahmed al-Wadaei, director of advocacy at the Bahrain Institute for Rights and Democracy (Bird).

He said he would not attend the appointment if there were no doctors, therefore, asked by a prison officer to sign a statement, declaring that he was rejecting medical treatment, but Miqdad refused.

His refusal to sign the statement was met with aggression, he told the rights group, adding that a group of officers attempted to beat him while verbally abusing him.

Other officers intervened and stopped the physical assault before he was returned to his cell, he said.

"This is a violent assault attempt without any exaggeration," Miqdad said. "The reason is revenge, aggression, injustice, and targeting."

The Bahraini ministry of interior dismissed his report as "incorrect," saying "there was no mistreatment or infringement."

However, according to Bird, Miqdad has been subjected to "deliberate medical negligence," despite suffering a range of health conditions, including chronic headaches, swelling in his leg which restricts his movement, cataracts in his eyes, and a slipped vertebrae disc.

Jau Prison, where Miqdad is being held, is the largest long-stay male prison in Bahrain. Located in the village of Jaww on the southeastern coast of Bahrain, the prison has an official maximum capacity of 1,201, but rights groups estimate at least 2,700 inmates are being held there. Most are classified as political prisoners held in connection with their anti-government activism during the Arab Spring uprisings in 2011.

Demonstrations have been held in Bahrain on a regular basis since the popular uprising. People demand that the Al Khalifa regime relinquish power and allow a just system representing all Bahrainis to be established.