General
The link was copied
News ID: 3480710
TEHRAN (IQNA) – A protest was held in Toronto, Canada’s Ontario, by dozens of members of the Afghan community outside city hall on Sunday. 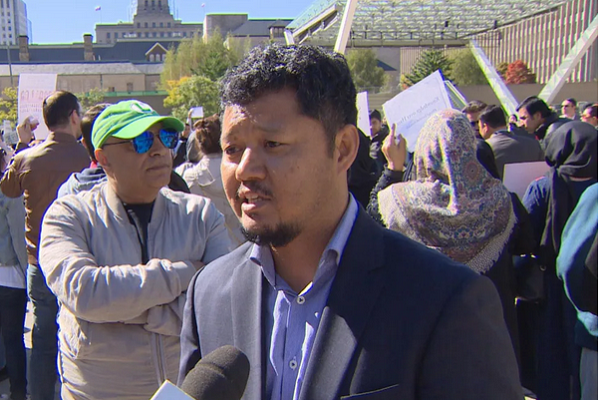 They demanded security from the Taliban-run government for women and girls in Afghanistan.

The protest was organized in response to Friday's suicide bombing that left dozens of students killed or injured in a Shia education center in Afghanistan's capital city of Kabul.

Halima Pahman, one of the organizers, said the protest aimed to raise awareness "about the ongoing genocide" happening in Afghanistan against the Hazara people — an ethnic minority group that is "consistently getting attacked by the Taliban, Daesh (ISIL or ISIS)" and other groups in Afghanistan.

"Today we are here specifically for the Sept. 30th, 2022 attack on the education center for women, young girls who came to mock a university entrance exam," Pahman told CBC Toronto.

"The international community need to pay attention … and recognize that this is a genocide that is happening in Afghanistan against the Hazara community."

Pahman, who serves as vice-president of Hazara Women Organization in Toronto, said the international community needs to help protect the Hazaras in Afghanistan and also help those who are fleeing as refugees in Pakistan, Indonesia and other countries.

On Friday the bomber struck an education center packed with hundreds of students in a Shia neighborhood, killing 32 people and wounding 27. Among the casualties were teenagers taking practice university entrance exams, a Taliban spokesman said.

The morning explosion at the center took place in Kabul's Dasht-e-Barchi neighborhood, an area populated mostly by ethnic Hazaras, who belong to Afghanistan's minority Shia community.

The Daesh terrorist group has carried out repeated, horrific attacks on schools, hospitals and mosques in Dasht-e-Barchi and other Shia areas in recent years.

A group of Afghan women protested in Kabul the day following the bombing. About 20 protesters gathered in the Dasht-e-Barchi area for about 45 minutes before their rally was broken up by Taliban security. They carried banners in English and Dari reading "Stop Hazar Genocide."

"We are asking the Taliban government, when they claim that they have brought security, how they cannot stop an attacker from entering an educational center to target female students. In this incident, one family has lost four members, why is it still happening," said demonstrator Fatima Mohammadi.

Tahir Shaaran, another organizer of the Toronto protest, said the Hazara community has been the target of attacks over the last 10 years.

"We're asking the international community, especially the UN, to act urgently and open a committee to investigate who is really behind the attacks on Hazara communities," he said.

"Apart from that, we want the UN National Security Council to have [an] urgent meeting and investigate and condemn the genocide of the Hazara."

Staff at the Kaaj Higher Educational Center spent Saturday cleaning up the wreckage caused by the attack, while victims' family members searched through data-x-items covered with blood belonging to their loved ones.

No one has yet claimed responsibility for the attack. The Islamic State group — the chief rival of the Taliban since their takeover of Afghanistan in August 2021 — has, in the past, targeted the Hazara community, including in Dasht-e-Barchi, in a brutal campaign of violence.