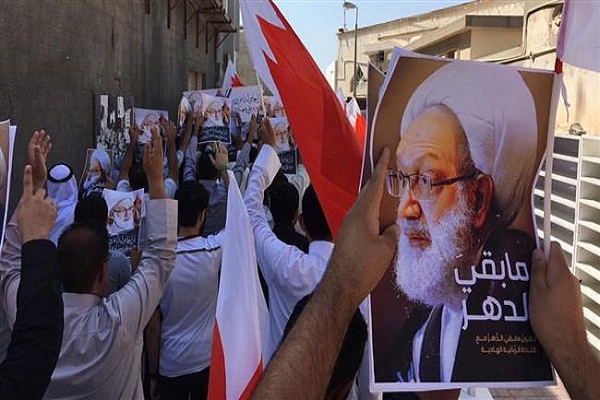 Bahraini regime forces fired tear gas at the protesters who took to the streets of the northwestern village of Diraz, located about 12 kilometers west of the capital Manama, on Friday.

They were carrying photos of the cleric during the demonstration in Diraz, which is also Qassim’s hometown, Press TV reproted.

The demonstrators also slammed Manama’s decision to impose a ban on holding Friday prayers in the village, condemning the Al Khalifah regime for its persecution of the Shia community.

On June 20, Bahraini authorities stripped the 79-year-old cleric of his citizenship, less than a week after suspending the al-Wefaq National Islamic Society, the country’s main opposition bloc, and dissolving the Islamic Enlightenment Institution founded by Qassim, and the opposition al-Risala Islamic Association.

Bahrain, a close ally of the United States in the Persian Gulf region, has seen a wave of anti-regime protests since mid-February 2011. Scores of people have been killed and hundreds of others wounded or detained in Manama’s ongoing crackdown.

Troops from Saudi Arabia and the United Arab Emirates were deployed in March that year to assist Manama in crushing the protests.