General
News ID: 3464332
TEHRAN (IQNA) – In the wake of the attack on the people of New York City this week, US President Donald Trump released a variety of xenophobic proposals aimed at hurting immigrant and Muslim communities. 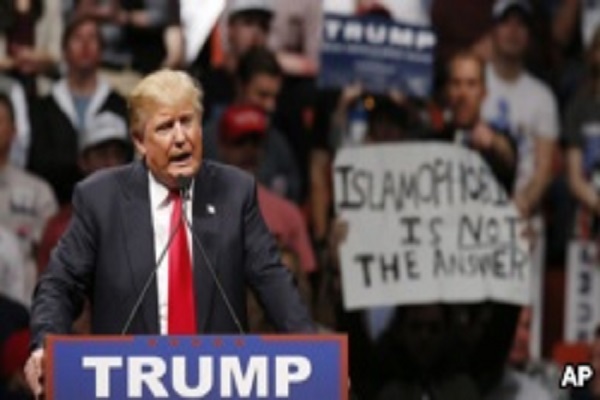 Threatening to "end chain migration,” terminating the long-standing diversity lottery program, abandoning due process and civil liberties, the President is attempting to exploit Tuesday’s attacks to advance an aggressively anti-Muslim and anti-immigrant agenda long championed by his administration.

Christina Sinha, Staff Attorney at Asian Americans Advancing Justice: "We condemn the recent attack in New York City and offer our deepest condolences to the victims and families impacted by this horrible act of hate. However, we cannot allow President Trump to use this terrible tragedy as an excuse to further scapegoat Muslims and intensify his xenophobic, anti-Muslim policy agenda.”

Albert Fox Cahn, CAIR Representative: "CAIR condemns the horrific and cowardly attack in Manhattan and offers sincere condolences to the loved ones of those killed and injured. Rather than trying to bring our country together, this President is seeking to rip apart our constitution, attacking our fundamental rights. We’ve never sent suspects arrested on U.S. soil to Guantanamo Bay, not even in the darkest days after 9/11.”

Avideh Moussavian, Senior Policy Attorney at the National Immigration Law Center: "Strong leaders recognize that moments of tragedy call for unity, not sowing harmful divisions. After this week’s tragic events in New York, President Trump once again failed to show the leadership we need in these moments and instead wants to exploit this devastating attack to promote his laundry list of anti-Muslim policies to turn our nation into a country where the American dream is sold to the highest bidder. These proposals would betray our fundamental values of fairness and due process and threaten to turn our immigration laws into a race and class-based system. Our lawmakers on both sides of the aisle should remember those lessons and reject Trump’s call to divide and discriminate.”

The #NoMuslimBanEver campaign is organized by a coalition of national and local civil rights and Muslim advocacy groups who are leading efforts around the country to fight against President Trump’s latest unconstitutional Muslim Ban, as well as other discriminatory immigration policies that criminalize and negatively impact American Muslim communities and immigrants across the country.