A Hidden Treasure in Mountains of Rhodope: Library with Golden Quran

General
News ID: 3464695
TEHRAN (IQNA) - The village of Çıngırdere, hidden in the piedmont of Rhodope Mountain in Bulgaria, is famous for its natural beauty as well as its handwritten Islamic manuscripts. 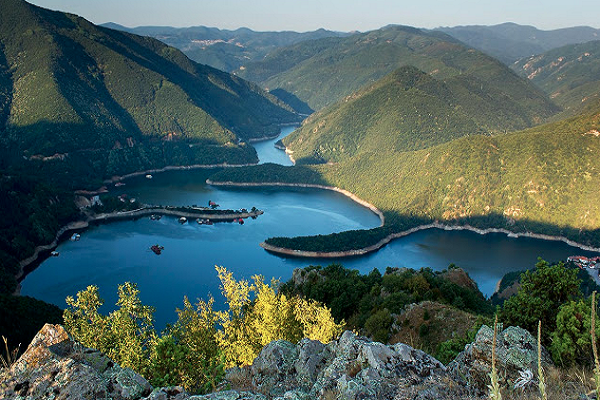 The village has a library with dozens of manuscripts. Library consists of books hiding by the people during the communist period and collected from the villagers after the fall of the regime. Locals protected Ottoman Turkish and Arabic manuscripts, even if they did not understand. Among the manuscripts, there is also a golden gilt Quran which is called ‘Golden Quran’ belonging to the 14th century.

The double-minaret mosque, built in the middle of the village and symbol of the settlement, has the largest library of the country after the National Library in Sofia in terms of manuscript Islamic works. There are more than 800 prints and over 400 manuscripts including philosophy, astronomy, fiqh, oratory and history books.

Hayri Brahimbashev, former head of the village, says that after the construction of the mosque in 1999, they needed to build a library and assigned 7 young people to do the job: “Volunteers went from door to door collected these ancient manuscripts. Our oldest work is the 14th century ‘Golden Quran’. Since every Allah word in this Quran is written in golden gilt letters, we gave it the name ‘Golden Quran’. During the time of prohibition and persecution our people were able to protect these books in very difficult conditions. Our aim is to convey the valuable works buried during the communist regime to future generations. We sent a few people to the proper courses regarding library education and finally we realize our dream.”

There are administrative documents bearing witness to the history among the works collected from the public. Many documents, such as marriage texts and birth papers, offer an insight to contemporary life. Undoubtedly, the most valuable piece of the library is the Qur'an, which belongs to the 14th century according to the findings of the scientists and is written in the golden gilt letters of the words “tawhid” and Allah.

The mushaf, estimated to belong to the Semerkand school, was found on the wall of a building what was going to be destroyed in a nearby village. Stops and the marks on the edge of the rice paper are also gilt. This is why the people call the mushaf ‘Golden Qur'an’. The wood covering of the Quran, which is missing 10 pages, was made later. Apart from this Quran, which the people protect attentively, there is another mushaf which is similar to it. Although it is not golden gilded, it is estimated to be very old like the Golden Quran.

In the library, a 200 year-old book attracts attention. The Bible, which is Ottoman Turkish, was printed in royal prints in France. Among the earliest works in the library are the works of Ibn Arabi's “Dürrü Meknun” of 1620, “Kenzül Münir” of 1650 and “Talim and Müteallim” of 1674.

Hayri Brahimbashev is complaining about not being able to restore the antiquarian books. Because there is no expert enough, a group of young people took a two-week course in Sofia at the National Library can deal with the repair the antiquarian books. In the communist era, when Islamic books and Ottoman Turkish were prohibited, some books were protected buried and some of them kept hidden in ceilings and basements. Therefore, some books have been burned or For this reason some of them have been burned or damaged. The locals tried to repair some books on his own, with producing cases with flowered fabric or sewing the torn pages. Some of the books need an expert since the pages got wet due to the negative protection conditions and moisture. Some books that are about to fall apart completely are kept closed in fabric bags, while others are kept in nylon bags.

Abdurrahman Akbaş, worked in the Religious Publications General Directorate of Religious Affairs, came in 2011 to the village and registered these works and a catalog containing over 500 works was established. The locals are expecting more help from experts in Turkey.

The people of the village are also preparing to apply for a special library project for Islamic artifacts to be financed by European Union funding sources.

Persian, Arabic and Ottoman Turkish manuscripts and documents are waiting to be discovered and evaluated by historians and Islamic experts.