General
News ID: 3465409
TEHRAN (IQNA) –  The Organization of Islamic Cooperation’s (OIC) secretary-general met Pope Francis at the Vatican on Friday and thanked him for his stance on the plight of Rohingya Muslims and migration issues. 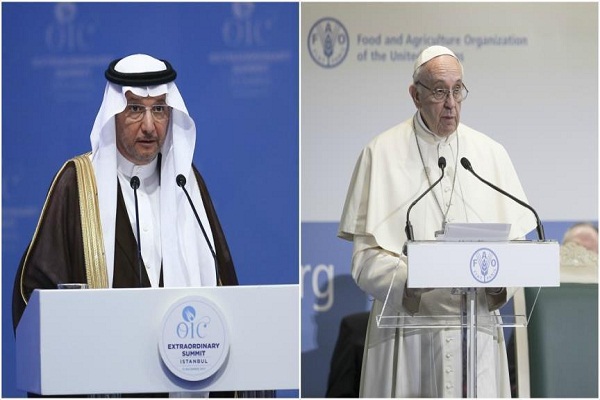 In a written statement, the OIC said Yousef bin Ahmad al-Othaimeen and Pope Francis both “emphasized the importance of interfaith dialogue and raising the voice of wisdom and tolerance to combat extremism and terrorism.”

The statement said al-Othaimeen emphasized to Pope Francis “that terrorism has no religion, and that OIC condemns all terrorist acts coming from any religion.

“Al Othaimeen presented his thanks to the pope for his stand on the issue of Al Quds (Jerusalem) and the basic rights of the Muslims and Christians in the holy city.

“Both sides were in agreement on the cause of Palestine and Al Quds.

“Al Othaimeen also appreciated the position of the pope on many issues such as promoting human rights and migration, expressing his thanks to Pope Francis for his position on the Rohingya Muslims and their rights.

“The pope from his side expressed his support to the basic rights of the Rohingya, adding that their suffering has been going on for a long time, and he thanked neighboring countries, especially Bangladesh for hosting them,” the statement added.

The Rohingya, described by the UN as the world's most persecuted people, have faced heightened fears of attack since dozens were killed in communal violence in 2012.

Since Aug. 25, 2017, more than 750,000 refugees, mostly children and women, have fled Myanmar and crossed into Bangladesh after Myanmar forces launched a crackdown on the minority Muslim community, according to Amnesty International.