General
News ID: 3466226
TEHRAN (IQNA) – A self-styled Christian Baptist pastor from New Zealand accused of harassing worshippers at two Brisbane mosques earlier this week has had his visa cancelled and is facing deportation from Australia. 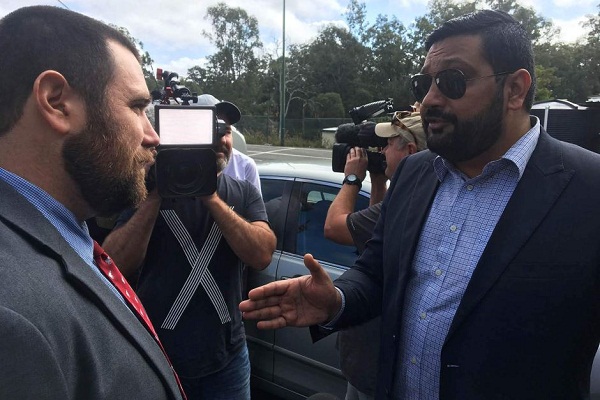 New Zealand national Logan Robertson, 31, and two others were charged on Friday after allegedly abusing community members at the Kuraby and Darra mosques on Wednesday and Thursday.

Robertson is the self-proclaimed pastor of the Pillar Baptist Church which originated in New Zealand.

On Wednesday a group of up to six men including Robertson were accused of entering the Kuraby mosque and harassing worshippers, including teenage boys, in the lead-up to 1:00pm prayers.

A teenage boy was allegedly verbally abused and called a terrorist.

The following day, there were heated scenes outside the Darra mosque, when activists from the Pillar Baptist Church confronted Islamic leaders.

When the activists were denied access into the mosque, a heated argument broke out between Robertson and Ali Kadri from the Islamic Council of Queensland.

Kadri asked: "I'm trying to talk to you in a nice manner, why are you responding in such an aggressive manner?"

Police intervened and forced the group to leave the property.

The Immigration Department reviewed Robertson's case and the Australian Border Force cancelled his visa overnight and placed him into detention.

Australian Minister for Home Affairs and Immigration Peter Dutton said he was "disturbed" by the allegations.

Dutton said Robertson had been counselled about his behavior prior to entering Australia.

"It's unacceptable to anybody to act outside of the conditions of your visa particularly where people are given warnings or counselled before they come into our country," he said.

All three men were expected to face court next month on charges of public nuisance, entering a premises with intent and trespass.

Police said on Friday investigations into the two incidents were continuing and it was possible more charges could be laid.

Kadri said he was glad the government acted "swiftly".

"The most important thing is that such kind of hatred is not in our community whether it's through the criminal justice system or through deportation that's number one," he said.

Kadri said there was still panic within the Muslim community and that extra security measures would still be put in place.