General
News ID: 3466433
TEHRAN (IQNA) – A controversial New Zealand Christian pastor has been deported from Australia, but has no regrets over harassing Australian Muslims in their mosque. 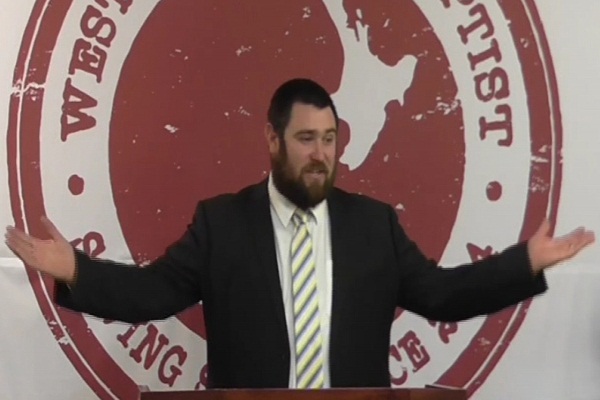 Logan Robertson vented about the Australian government to camera from his detention cell and while leaving the airport; "How sick is a government who would do something like that because you said you hate a religion?"

Before his deportation the 31-year-old pastor was accused of verbally abusing a 65-year-old man and 15-year-old boy when he and a group of followers turned up uninvited to a Mosque in Kuraby, Brisbane.

Australian police claim Robertson said to the men "You don't belong in this country, you bl***y terrorist, and we should burn this place down to the ground."

Robertson allegedly then referred to Islam as a cult.

Less than 48 hours later, Robertson visited the Darra Mosque in Oxley, Melbourne, where he was filmed in a heated exchange with Islamic Council of Queensland spokesman Ali Kadri.

"Our country embraces free speech but doesn't tolerate hate speech and we don't tolerate people who are going to harass those people going about their business at a place of worship," Dutton said.

Robertson appears to show no remorse for his actions at the mosques. He told RadioLIVE on Friday that he has approached a number of Islamic leaders for interviews for his documentary "exposing Islam".

In the video entitled "Goodbye Australia" Robertson said he was not planning on fighting the deportation order.

"I've got better things to do," he explained.

Who is Logan Robertson?

Robertson founded the contentious Westcity Bible Baptist Church in Avondale in 2014. He made headlines in 2017 for preaching that gay people should be shot. He moved to Brisbane with his family to launch the Pillar Baptist Church, which staunchly opposes Islam, abortion and homosexuality. It reportedly has few members and has no association with the Baptist denomination of New Zealand.

Robertson is currently in the Philippines on a "mission trip" expanding the church's message.