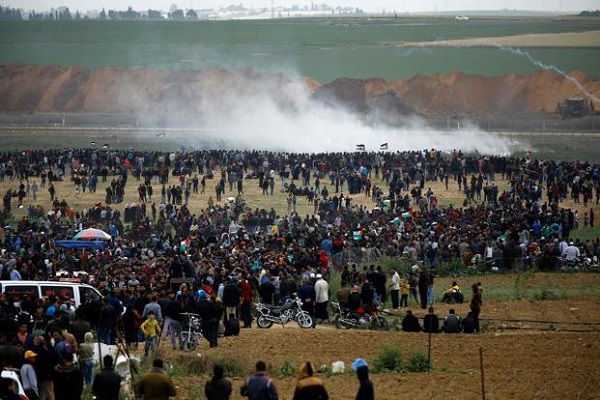 From March 30, 2018 onward, Palestinians in the blockaded enclave have held weekly “Great March of Return” protest rallies against the Israeli occupation of their lands, demanding the return of those driven out of their homeland by Israel aggression during the past decades.

According to the Palestinian Information center, Israeli forces have killed some 350 protesters during the weekly demonstrations. Nearly 31,000 others have been injured in the rallies.

Earlier in the year, Palestinian groups had called for holding mass rallies along the border with the Israeli regime to mark the second anniversary of the "Great March of Return", but on Saturday they announced that the planned rallies were cancelled over the pandemic.

“We call upon our people not to go to the Return encampments on March 30 and to stay home in order to maintain the safety of our people in the face of this lethal pandemic,” said Khaled al-Batsh, a senior member of the Palestinian resistance group the Islamic Jihad.

He instead called upon Gazans to mark the day by raising Palestinian flags on their rooftops and burning those of the Israeli regime.

The COVID-19 disease, caused by a new coronavirus, jumped from wildlife to people in the Chinese city of Wuhan late last year and is currently affecting 199 countries and territories across the globe. It has so far affected more than 621,590 people and killed over 28,790.

The World Health Organization (WHO) has already declared the coronavirus outbreak a global pandemic.

According to figures by Palestine's health ministry, as of Saturday, the infectious disease has affected 97 Palestinians and killed one. Nine of the infected people are in Gaza Strip and the rest are in the occupied West Bank.

On Thursday, the health ministry called on the international and relief institutions to "urgently" provide the Gaza Strip, which is home to some two million people, with "$23 million."

“The health ministry is deeply concerned over the severe shortages of essential medicines, medical consumables, laboratory supplies and blood banks, in addition to the limited equipment used to carry out coronavirus examinations,” added spokesman for the health ministry Ashraf Qudra during a press conference.

He also blamed the Israeli regime for systematically undermining the health and humanitarian services in Gaza over long years of siege, holding it fully responsible for the lives of the population.

Gaza has been under an Israeli siege since June 2007. The blockade has caused a decline in the standards of living as well as unprecedented levels of unemployment and unrelenting poverty.

The Israeli regime denies Gazans their basic rights, such as freedom of movement, jobs with proper wages as well as adequate healthcare and education.