General
News ID: 3471539
TEHRAN (IQNA) – Muslim leaders in the US state of Indiana are calling for a hate crime investigation into a drive-by shooting at an Indianapolis mosque on Eid al-Fitr while congregants were inside. 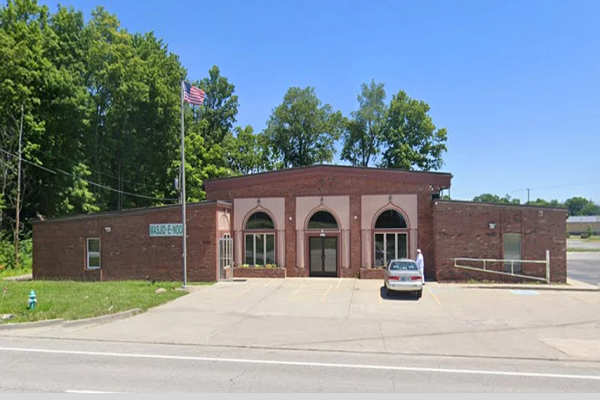 While there were no casualties in the attack Sunday night (May 24) at Masjid-E-Noor, a modest, low-slung building on the city’s northwest side, one bullet pierced a window and nearly struck the few worshippers inside.

“Given that Sunday was one of the holiest days in the Muslim calendar, and given that none of the churches nearby, thankfully, experienced the same thing we did, we think it is clear that our mosque was targeted because it represents the Islamic faith,” said Shamaas Hassan Nyazee, president of the mosque’s board.

An Indianapolis Metropolitan Police Department representative said the shooting is under active investigation.

The shots appear to have been fired from a red sports car captured on Masjid-E-Noor’s surveillance camera, mosque leaders said at a news conference Thursday morning.

Alami said the shooting was an “apparent hate crime against the mosque and an act of attempted murder against those inside.”

“This honestly caught us off guard,” she said. “Just to realize that this happened on Eid, the holiest day on the Muslim calendar, is disheartening. We hope that just like other faith communities we can transition back to normal life peacefully.”

Eid al-Fitr marks the end of Ramadan, Islam’s holy month of fasting and increased prayer, which has become a time of heightened anxiety for some Muslim minority communities. In Missouri, a man faces state and federal hate crime charges after a mosque burned to the ground on the first night of Ramadan. Another mosque in Salt Lake City saw an apparent vandalism the same day.

“I’m horrified by the recent shooting that appeared to target Masjid-E-Noor Mosque in Indianapolis on Eid — one of the holiest days in Islam,” said US Rep. André Carson, whose district includes most of Indianapolis and who was the second Muslim elected to Congress, in a statement. “I urge local authorities to thoroughly investigate this act of violence. We won’t tolerate bigotry in our community or anywhere else.”

In February of last year, a Muslim man was shot twice in the back and died in Indianapolis in what was termed a road rage incident. That killing drew calls for a hate crime prosecution that were denied because Indiana then had no hate crime law. The state has since passed hate crime legislation, though it has come under fire for being too weak.

Nyazee noted that, in accordance with Indiana’s guidelines on houses of worship reopening, congregants dressed in their religious garb had lined up outside the mosque Sunday morning, waiting their turn to perform Eid prayers inside.

That display may have drawn the attention of the perpetrator, mosque leaders speculated. But they said they were grateful that the mosque was close to empty due to the outbreak.

“Had it not been for the coronavirus precautions, the mosque would have been filled to capacity with worshippers, with families and children,” Nyazee said. “It is difficult to imagine how things could have been if the situation turned out like that.”

One of the few worshippers inside the mosque at the time was Mohammed Nomair Chughtai, an imam at Masjid-E-Noor, whose car’s back windshield was also struck in the shooting.

He and about seven men had just performed their sunset prayers together. When they heard the shots, they rushed to hide in the hallway, where he called the police.

“We were about to leave when we heard about four to five shots, and we were shocked,” Chughtai said. “We couldn’t imagine this happening to us. We always follow the guidelines, we always follow whatever is required from our side, and we do more than is required.”

More than 150 families attend the northwest Indianapolis mosque, which was founded in 2013. It also hosts the Al Hussnain Institute of Learning and Teaching, a full-time madrassa producing Islamic scholars and imams.

The mosque will be installing bulletproof glass to help protect against future incidents and is considering hiring private security guards.

“Quite frankly, at the moment it’s a little scary, having to come into your place of worship thinking that there could be someone out there trying to cause you harm,” Nyazee said.