Strategic Council of International Servants of Mahdism Condemns Racism in US

General
News ID: 3471801
TEHRAN (IQNA) – The Strategic Council of the International Servants of Mahdism denounced racism in the US and brutal repression of those demonstrating against it. 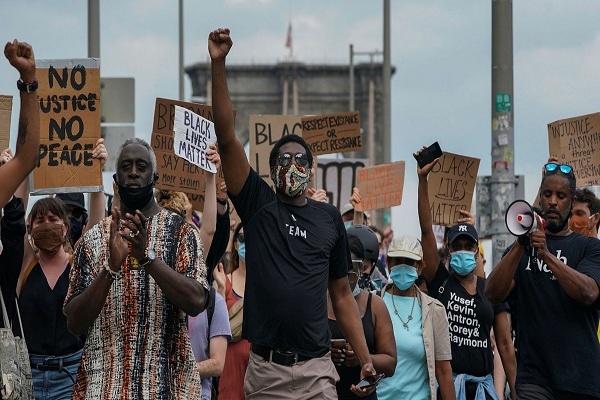 In a statement, the council, affiliated with the Centre for Justice at the Holy Mosque of Jamkaran, hoped that the popular uprising against racism will pave the way for a global awakening and revolt against oppression around the world and pave the way for the emergence of the only saviour of mankind in the world, according to jamkaran.ir.

Following is the text of the statement:

In the Name of God, the Most Beneficent, the Most Merciful

The establishment of world peace and security and the establishment of fairness and justice has been the ideal and lofty goal of the great prophets from Adam to the Seal of the Prophets, Muhammad, as is stated in the Holy Quran (“so that mankind may maintain justice” [Quran 57:25]) and is based on the definite divine promise (“Indeed My righteous servants shall inherit the earth” [Quran 21:105]). The Seal of the Vicegerents and the Promised One, Imam Muhammad al-Mahdi, will bring this to realization with the help of the justice seekers of the world and Jesus Christ.

The widespread protests and crises that we are currently witnessing throughout the fifty states of the United States are the reaction to the tyranny, racism and injustice of the leaders who have claimed freedom, democracy and human rights over the centuries concerning the African-Americans and the people of this country.

The American government’s brutal and violent treatment of the people is a clear example of the confrontation between the oppressors and the oppressed, who can no longer tolerate all this humiliation.

If this widespread uprising, which has spread to Europe and other parts of the world, is suppressed by coercion and violence at the present time, it will undoubtedly turn into a fire under the ashes that will be ready to ignite and uproot the foundations of oppression and tyranny at any time.

The Strategic Council of the International Servants of Mahdism, which is affiliated with the Centre for Justice at the Holy Mosque of Jamkaran, is inspired by the Quranic teachings, the school of Imam Khomeini and the pure ideas of Imam Khamenei and states that the crimes of the Great Satan [the United States] are against the protesters who want their basic rights, including security, to be respected.

We strongly condemn the brutal repression of the demonstrators and call on all free thinkers, seekers of justice, thinkers and lovers of peace and humanity, regardless of colour, language, religion, tribe, ethnicity, race or nationality.

We condemn the actions against human rights by the dictatorial rule of the “Mother of Corruption of the Century” and support the oppressed people of the United States, especially the African-Americans.

We make this statement in the hope that this popular uprising will pave the way for a global awakening and revolt against oppression around the world and pave the way for the emergence of the only saviour of mankind in the world.

With hope for the ultimate victory of righteousness over falsehood throughout the world.

The Strategic Council of the International Servants of Mahdism