General
News ID: 3472174
TEHRAN (IQNA) – Hajj Pilgrims safely performed the last stoning ritual on Jamarat Bridge in Mina on Sunday before moving back to Mecca’s Grand Mosque to complete their Hajj with the last circumambulation of the Kaaba known as “Farewell Tawaf.” 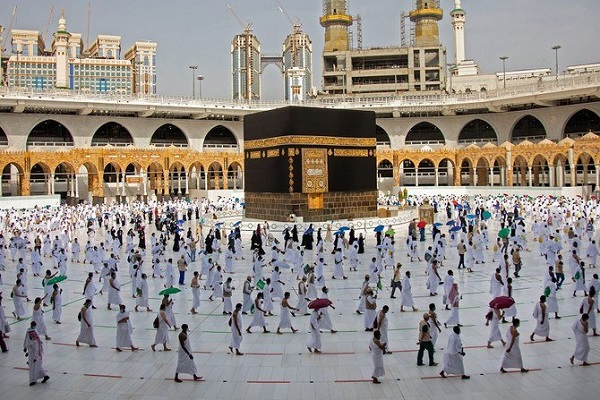 The ritual is complete when worshippers walk seven times around the Kaaba, marking the end of the Hajj season.

Pilgrims entered the Grand Mosque via designated doors and were required to follow marked paths to keep a safe distance between each other.

Meanwhile, the ministry confirmed that there have been no reports of coronavirus infections among pilgrims at the holy sites of Hajj on the fifth day of the pilgrimage.

Saudi Deputy Minister of Hajj and Umrah Abdulfattah bin Sulaiman Mashat said that after the Hajj rituals were over, the pilgrims would undergo a medical examination.

Saudi authorities implemented strict precautions this year to ensure a safe Hajj season. “There was a detailed plan for each step pilgrims take; the main focus was how to effectively apply medical precautions and preventive measures,” Mashat said.

“By taking all these preventive measures and great efforts, the Kingdom sends the message that human health is its top priority,” he said.

Bashir Fadlallah Al-Faeq, who is from the Central African Republic, expressed his gratitude at being able to participate in this year’s exceptional Hajj season. “I feel safe and confident with the amazing and wonderful preventive measures taken by the authorities to limit the spread of the pandemic.”

The Saudi Public Security confirmed that no one was able to enter the holy sites without permission, noting that more than 2,000 violators who attempted to infiltrate these areas were caught and legal action was taken against them, according to Arab News.