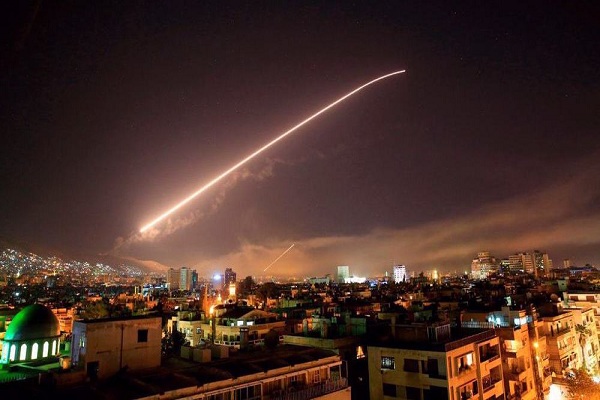 According to the report, the Israeli copter attack took place at 10:40 pm on Monday in the al-Qahtaniyah region of Quneitra, and the losses were restricted to material damages.

The Israeli military has also acknowledged the attacks, saying its fighter jets, attack helicopters and other aircraft were involved in the latest aggression.

Tel Aviv says the Monday raid was launched in response to a Sunday incident near the border between the occupied Palestinian territories and Syria, during which the Israeli military reportedly killed four men, claiming that they were planting explosives.

Israeli military spokesman Lieutenant Colonel Jonathan Conricus told reporters on Monday that the men "were inside Israeli territory but beyond the fence" separating the Israeli-occupied sector of the Golan Heights and the Syrian part of the territory.

He added that an Israeli commando unit, backed by airstrikes, fired simultaneously towards the men after 11 pm Sunday (2000 GMT).

Israel has placed its forces near the border with Lebanon and Syria on high alert after Lebanon’s Hezbollah resistance movement announced the death of one of its members in an Israeli airstrike in Damascus on July 20 and promised retaliation.

Last week, Israeli and Western media outlets claimed that Israel's forces had thwarted an effort by Hezbollah fighters to infiltrate into the occupied territories through Shebaa farms along Lebanon’s southern border.

Last Monday, Hezbollah dismissed the claim about border clashes as fake, saying it was aimed to boost the morale of Israeli forces by fabricating fictitious victories.

Tel Aviv frequently attacks military targets inside Syria in what is considered as an attempt to prop up Takfiri terrorist outfits that have been suffering heavy defeats against Syrian government forces.

Israel seized the Golan Heights from Syria after the 1967 Six-Day War and later occupied it in a move that has never been recognized by the international community.