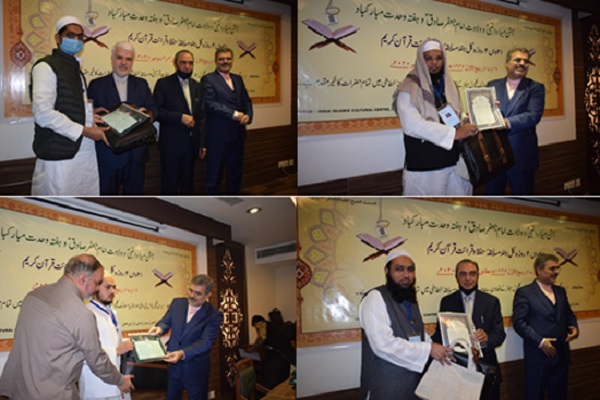 According to the website of the Islamic Culture and Relations Organization, the two-day competition was organized at the Islamic Center of India in New Delhi.

The Iranian Cultural Center in India held the competition on November 4 and 5 in cooperation with the Islamic center.

Forty-five Quran reciters and memorizers from Delhi, Uttar Pradesh, Noida and some other states of India participated in the contest.

The closing ceremony of the competition was held on November 5 with the participation of Iranian ambassador to India, head of the Islamic Center of India, Iranian cultural attaché in New Delhi and a number of religious and Quranic figures of the country.

Mohammad Khalid from Haryana, Abdulrahman from UP and Mohammad Rashid from Haryana won the first to the third ranks in recitation category and Fahm Ahmad, Hifzul Rahman and Nasim Ahmad were the three winners in memorization category who were awarded at the ceremony.

Addressing the program, the Iranian cultural official highlighted the potentials in Quranic fields and Seerah of the Holy Prophet which can be used as opportunities to develop cultural cooperation among Muslims.

Farouq, Indian religious figure also delivered a speech in the ceremony stressing the necessity of unity in Muslim Ummah.

The Iranian ambassador was another speaker in the ceremony who, referring to the verse 82 of Surah Israa, stressed that the Holy Quran is a healing and mercy for the believers, but it only increases the wrongdoers in loss.