General
News ID: 3474000
TEHRAN (IQNA) – Iraq’s top Shia cleric Ayatollah Ali al-Sistani’s office denied comments by an Iraqi diplomat that a document on human fraternity will be signed during an upcoming visit by Pope Francis to the Arab country. 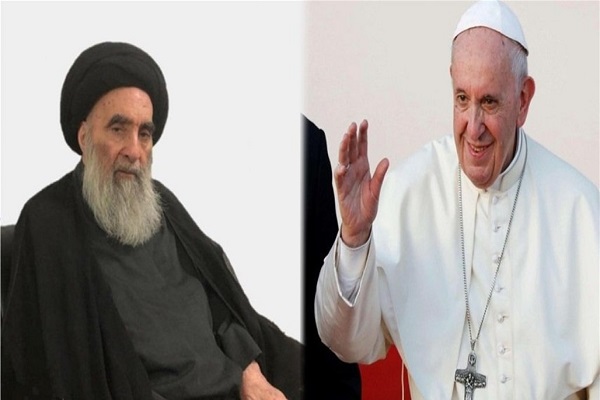 Iraq’s ambassador to the Vatican Rahman Al-Ameri had said last week that the senior cleric and the head of the Catholic Church will sign the document during the upcoming visit.

The two leaders will also sign a document on human fraternity aimed at promoting mutual trust among followers of all faiths, al-Ameri said.

The document calls for commitment to values like peace, fraternity, peaceful coexistence, justice and benevolence, he added.

The office of Ayatollah Sistani said, however, that there have been no discussions about such a document.

Pope Francis is scheduled to visit Iraq March 5-8 in what would be the first-ever papal trip to the country.

Iraqi Prime Minister Mustafa al-Kadhimi said last week that the Pope’s visit will spread the spirit of brotherhood in Iraq and the region.