General
News ID: 3474306
TEHRAN (IQNA) – A debate is growing in the United Kingdom over whether schools should show controversial images of Prophet Muhammad (PBUH) to children, after a teacher at a state high school in northern England did so and was later suspended. 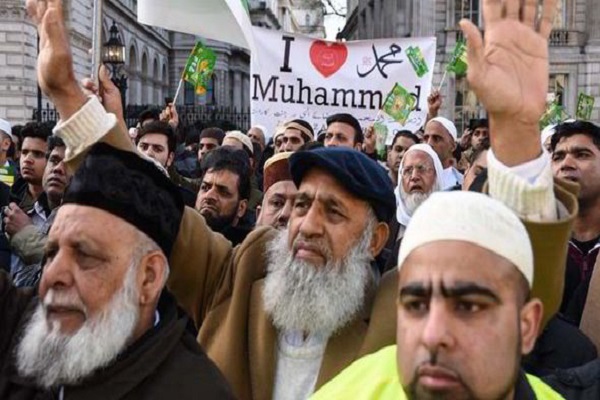 The image shown at Batley Grammar School was reportedly taken from the same series of caricatures first published in the French satirical magazine Charlie Hebdo.

After the British teacher showed the cartoons, about two dozen protesters gathered outside the school to denounce the move on Thursday. Local media said more people continued to demonstrate near the school on Friday.

The school in West Yorkshire, where there is a large Muslim community, has apologized.

“The member of staff has also related their most sincere apologies,” he said.

“It’s important for children to learn about faiths and beliefs. This must be done in a respectful, sensitive way.”

The class in which the images were shown reportedly took place on Monday.

Prophet Muhammad (PBUH) is deeply revered by Muslims and any kind of visual depiction is forbidden in Islam.

The caricatures in question are seen by Muslims as offensive and Islamophobic because they are perceived to link Islam with terrorism.

“Batley Grammar School is right to acknowledge that the use of such materials – universally understood to be highly offensive to Muslims – is inappropriate. We commend the swift and unequivocal action taken by the school to address the deep distress caused,” the Muslim Council of Britain (MCB), the UK’s largest Muslim umbrella body, wrote on Twitter.

“This case illustrates the importance of close engagement between schools and parents regarding issues not on the national curriculum. Consultation should be had in advance of anything that may cause communities to feel excluded and victimized.”

The founder of a local charity called Purpose Of Life, Mohammad Sajad Hussain, said he was “deeply hurt” by the “insulting caricatures of our beloved Prophet Mohammed”.

He said the charity was unwilling to continue its work with the school until the teacher was “permanently removed”.

Sayeeda Warsi, a member of the House of Lords and former chairman for the ruling Conservative Party, said: “The suspended teacher should not be named, nor hounded, but the school should ask whether the issue of blasphemy could have been taught in a better way that didn’t necessitate the use of cartoons depicting Muslims wearing bomb turbans.”

The UK is home to more than 3.3 million Muslims, according to the Office for National Statistics – about five percent of the overall population.

Robert Jenrick, the housing secretary, told Sky News that the protests were “not right”.

“That is not a road we want to go down in this country so I would strongly urge people concerned about this issue not to do that,” he said, adding reports the teacher is in hiding were “very disturbing”.

Others saw the school’s apology and teacher’s suspension as a sign that free speech was at risk.

The National Secular Society called the protest an “attempt to impose an Islamic blasphemy taboo on a school”.

Matthew Thomspson, a reporter with the LBC radio station, tweeted: “Muslims who are offended by cartoons of the Prophet Muhammad being shown at Batley Grammar School have every right to let their feelings be known. But they must also know that they have absolutely no right not to be offended. Blasphemy is not a crime.”

Henry Bolton, former leader of the far-right UK Independence Party (UKIP), tweeted: “Those people protesting outside the school in Batley need to accept that Great Britain is secular. We have no laws on blasphemy, there is no right not to be offended and they have no right to demand otherwise. The outrage isn’t a cartoon, it’s that the teacher needs protection.”

In 2019, Muslim parents staged protests at a primary school in the central city of Birmingham after it held lessons incorporating same-sex relationships and transgender issues.

Thursday’s incident came after a teacher in France was murdered in October by a teenager of Chechen origin for showing cartoons of the prophet to students during a lesson on free speech.

The caricatures were popularized by Charlie Hebdo, whose Paris office was attacked in 2015, leaving 12 people dead.

In France, President Emmanuel Macron has repeatedly confirmed his support for the images to be shown, comments that often provoke anger within France’s Muslim community.