General
News ID: 3474674
TEHRAN (IQNA) – For Malaysian Ailin Abdullah and her family, Ramadan in Sweden not only means fasting for up to 18 hours a day, but also a time for enjoying the diversity there. 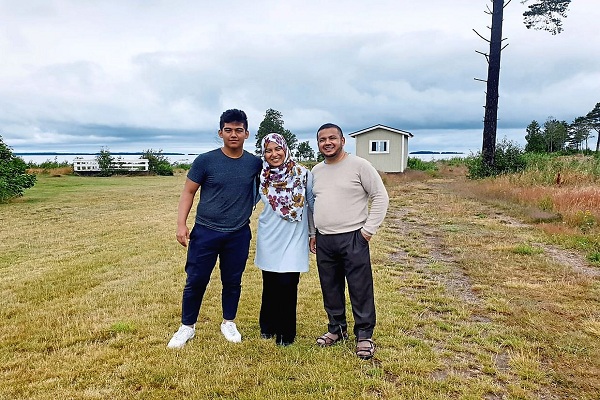 Other than the longer fasting hours, observing the holy month in the Scandinavian nation is not vastly different from that in Malaysia, said the Penangite who now lives in Sollentuna, a 15-minute drive from Stockholm city centre.

She said people discuss what to prepare for iftar (breaking the fast) and sahur (pre-dawn meal), and discuss plans to go to the mosque together.

“We will also visit each other and break our fast together, or buy gifts for one another in anticipation of Hari Raya Aidilfitri, as well as help each other to be the best Muslims one can be during Ramadan.

“I enjoy Ramadan here for the diversity that it offers, getting to meet people from different cultures and backgrounds and experiencing their festivities. Their families become my families too,” said Ailin, who works for Muslim Aid Sweden and is also attached to the Khadija Centre in Kista.

At the start of Ramadan, Ailin’s family of three fasted for around 16 hours, but now towards the end of Ramadan and as summer approaches, they fast for around 18 hours.

“We usually wake up for sahur at 2am or 3am; for sure, it’s not a normal time to eat, so we adjusted by eating light meals or just having warm drinks,” she said, adding that iftar is usually at about 9pm.

For iftar, Ailin’s husband, who is from Bangladesh, likes to have typical Bengali iftar dishes such as cholah (chickpeas), piaju (onion fritters), and beguni (brinjal fritters).

However, she said that her family enjoys all kinds of food.

As Sweden did not implement any lockdown amid the Covid-19 pandemic, Ailin said Ramadan this year is just like any other year except without the iftar invitations, buffet iftar dinners or congregational terawih prayers.

“People here are very mindful of social distancing and keeping each other safe,” she added.

Ailin and her husband, both in their 40s, moved to Sweden in 2008 but lived in Denmark for six years prior to that.

“My first Ramadan in Scandinavia was in the winter so it lasted only two or three hours.

“It did not feel like I was fasting at all and I was six months’ pregnant at that time.

“However, as the days become longer, the body will gradually adjust to the longer days, ” said Ailin, who has a 19-year-old son.

Being away from home also meant that she got to define how Ramadan is observed for herself and her family.

“Despite it being a non-Muslim country, I feel we have done very well in how we wish to practise our faith,” she said.

Although Ailin is more than used to fasting abroad, having lived overseas for over 20 years, there are still some things that she misses about Ramadan in Malaysia.

“I miss walking into a mosque and being able to sit down and spend some time just for reflection and calming the mind.

“In Sweden, most mosques keep normal ‘business hours’, especially the ones in bigger cities. It is indeed a luxury having an open mosque 24/7,” she said, adding that she also misses Ramadan bazaars.

Preparing Malaysian dishes require proper planning for the trip to the grocery store, which is not necessarily nearby, as well as the time it would take to cook, said Ailin, adding that 90% of Malaysian ingredients are, however, available in Stockholm.

“If I am really craving something which I am too lazy to prepare, I usually call up one of the kakak (elder sisters) here and ask them to cook for me.

“They are usually very happy to do so. Such is Malaysian hospitality!” she said.

For Hari Raya Aidilfitri this year, Ailin prepared her rendang about a week ago and has stored it in her deep freezer.

She will be having a simple celebration with her family.

“I will prepare some traditional Bengali sweets like mishti doi (sweet yogurt) and rasmalai and if I have time, then I’ll make a simple biryani. Otherwise, we will probably go and visit the usual suspects!” she quipped.