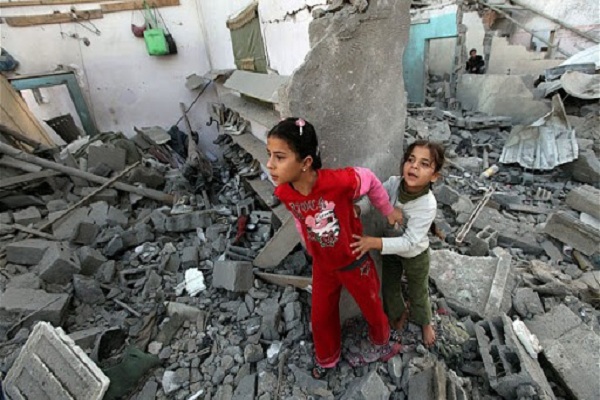 “Israel is killing Palestinians in Gaza, one family at a time. Israel is trying to uproot Palestinians from Jerusalem, expelling families, one home, and one neighborhood at a time. Israel is persecuting our people, committing war crimes and crimes against humanity. Some may not want to use these words, but they know they are true. Israel is unapologetic and relentless in pursuing its colonial policies. We are therefore left with two questions," the Palestinian Wafa news agency quoted Maliki as telling a virtual meeting of the UN Security Council on Sunday.

He described Israel as an “apartheid” regime, telling the Security Council to “act now to end the aggression. Act now so freedom can prevail -- not apartheid.”

Israel “is an occupying colonial power. Any assessment of the situation that fails to take into account this fundamental fact is biased,” Maliki said. “Israel always says, put yourselves in our shoes. But Israel is not wearing shoes. It is wearing military boots.”

"Why don’t you put yourself in our shoes. What would you do if your country was occupied, your people persecuted, besieged, massacred? Better yet, what did you do to achieve your independence and end the oppression of your people?" he queried.

The Palestinian foreign minister added, "Israel keeps doing the same things expecting a different result. Did it believe that its troops storming the holiest of sites, Al Aqsa Mosque, on the holiest of months, Ramadan, and on the holiest of nights, the Night of Destiny, would bear no consequences? Did it believe Palestinians would accept to live in enclaves and wait for the Israeli settlers to seize the next house? Did they expect Palestinians to coexist with the occupation, its walls, its blockades, its settlements and its prisons? There is no people on earth that would tolerate this reality."

"Israel is not only an occupying power, it is a nuclear power, it has a military arsenal, the iron dome, shelters, while our people in Gaza are besieged, trapped, with nowhere to go and no safe haven. Even the UNRWA schools within which they shelter are vulnerable to Israeli attacks. It is Palestinian civilians who need protection. They deserve compassion, solidarity and action," Maliki said.

So far, the Israeli bombardments have killed at least 192 Palestinians, including 58 children and 34 women, with the death toll expected to rise any minute in what has turned to be the deadliest night of the ongoing onslaught which began on Monday.

The asymmetrical Gaza war was triggered by repeated acts of violence against Palestinians in the occupied West Bank beginning last month and continuing to this day.

Since the commencement of the holy month of Ramadan, Israeli forces and settlers have harassed Palestinian worshipers at al-Aqsa Mosque. The regime’s military also forced Palestinians out of their homes in the occupied east Jerusalem al-Quds neighborhood of Sheikh Jarrah to add to its illegal settlements.

Guterres calls for end to bloodshed

UN Secretary-General Antonio Guterres, addressing the virtual session, called for an immediate end to the confrontations, warning that it could plunge the region into an “uncontainable” crisis.

“It has the potential to unleash an uncontainable security and humanitarian crisis and to further foster extremism, not only in the occupied Palestinian territory and Israel, but in the region as a whole,” he said.

He also criticized the Israeli regime’s bombardment of Al Jalaa tower in Gaza that housed offices of Al Jazeera, the Associated Press and the Middle East Eye among other news agencies.

“Journalists must be allowed to work free of fear and harassment. The destruction of media offices in Gaza is extremely concerning,” Guterres said.

Taking a seemingly neutral position, Guterres equated rocket attacks from Gaza to Israel’s heavy bombardment of the Israeli-besieged enclave, saying, “Rockets and mortars on one side and aerial and artillery bombardments on the other must stop.”