Netanyahu Losing Hope for Victorious End to His Gaza Offensive

General
News ID: 3474761
TEHRAN (IQNA) – The Israeli occupation army — the so-called Israel Defense Forces (IDF) — has been bombarding the besieged Gaza Strip in an attempt to destroy the infrastructure of the Palestinian resistance movements which responded to the brutal Israeli aggression against the Palestinian worshippers in Jerusalem's Al Aqsa Mosque, and the proposed dispossession of Palestinian families from Jerusalem's Sheikh Jarrah neighborhood. 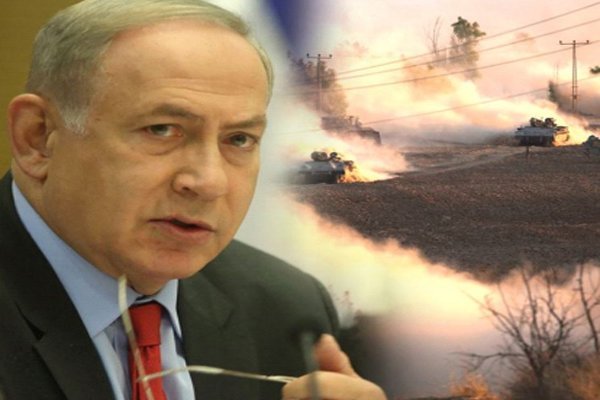 The resistance groups warned Israel about its violations in Jerusalem, but Prime Minister Benjamin Netanyahu and his government ignored them. Instead, the right-wing Israeli leader believed that he had found the opportunity to portray himself yet again as the savior of his country from the resistance "terrorists" in Gaza, and thus boost his chance of staying on as prime minister.

Netanyahu consulted his warmonger of a Defense Minister, Benny Gantz, who as Chief of Staff of the army in 2014 bragged about returning Gaza "to the Stone Age". The result of their discussion was another military offensive against the largely civilian population in the Gaza Strip. Hence, as soon as the Palestinian resistance fired seven rockets towards Jerusalem in an effort to stop Israel's violence against Jerusalemites and Al Aqsa Mosque, Netanyahu gave the go-ahead for the offensive on 10 May.

"I said that we would strike Hamas and the other terrorist organizations very hard, and we are doing just that," he said arrogantly. The operation, he noted, targeted the tunnel network built by Hamas, referred to by Israel as "the Metro". A day later, Netanyahu bragged about the achievements of the Israeli army. "In the last 24 hours, we have attacked underground targets," he said. "Hamas thought that it could hide there but it cannot hide there."

He depended on the strategic plan prepared by the Israeli army to turn the tunnels into death traps. Instead, the offensive started by killing a number of children, to which Netanyahu paid no attention. When he was asked by a journalist for a comment, he avoided a direct answer. Israel, he insisted, will not tolerate having "terrorist" groups firing rockets at it. "Israel has responded forcefully to these attacks and will continue to respond forcefully."

Israeli journalist Amos Harel covers military and security issues for Haaretz. "In recent years," he wrote, "the IDF has identified a trend – that Hamas will move its activists into the many kilometers of tunnels under Gaza in times of emergency – and has developed a plan for turning the tunnels into a death trap for Hamas combatants in the event that another high-intensity round of fighting broke out. It appears that military intelligence managed to crack open Hamas's secret and systematically map the network of tunnels and underground headquarters which were built at great cost."

The IDF even misguided the media intentionally regarding a ground operation as part of the plan to destroy the tunnel network. The intention, according to several Israeli military experts, was to tempt the Palestinian resistance fighters to enter the tunnels, and then attack them. This is not how it played out, though. Instead, a large number of civilian structures and homes were destroyed, killing dozens of non-combatants, mainly women and children.

Whenever he was asked about a ceasefire, Netanyahu said that time was still needed to complete the mission. When asked how much time, he replied: "This will take time. There's pressure [for a ceasefire] but we are getting considerable support, first and foremost from the US."

The Chief of Staff of the Israeli Army, Aviv Kochavi, also bragged about the "achievements" of the tunnel operation. "Hamas made a serious mistake and did not assess us correctly," he claimed, pointing out the damage that the army has inflicted on the movement's capabilities, particularly its underground infrastructure. Kochavi said that his troops had "heavily damaged Hamas's flagship project. Hamas's missile production capabilities have also been badly hit."

In this respect, the chief of staff was lying. His army spokespersons are doing the same: they're telling lies. Since Saturday night, the Israelis have pounded a certain area in Gaza with an air, sea and ground barrage of missiles destroying homes, damaging civilian infrastructure and killing innocent people, while claiming that they were targeting "terrorists" and rocket launchers.

Over the past three nights, dozens of Palestinian families have been partially or completely slaughtered. Their names deserve to be remembered: Al Tanani, Al Hadidi, Abu Hatab and Abul Ouf among others. Around 60 children, 30 women and two prominent doctors have been killed by the Israeli bombardment. They were not terrorists by any stretch of the imagination. The Israeli army could only produce a number of blurred satellite images to "prove" the military nature of the targets which had been destroyed. Moreover, the army has not been able to name any of the "senior resistance figures" that it claims to have killed.

Several resistance leaders and members have been killed, and some of the resistance infrastructures have been destroyed, but not to the extent promised by Netanyahu. "Despite Israel's impressive destruction of Hamas tunnels over the weekend, it refuses to specify how many Hamas activists were killed," said Amos Harel. "The army was only able to reap limited benefit."

According to Israeli journalist Shimrit Meir, "We are paying a high price for what is happening in Gaza. Damage to the home front, economy, politics and to Israel's image. These things need years to be repaired and some of them are unrepairable at all."

Al-Hodhod also reported Israeli journalist and political advisor Eldad Yaniv as saying: "Netanyahu is confused and he does not know how to end the operation in order to save himself and save his position. So far, there has not been any deterrence for the rockets which did not stop. The airport is closed and the 'clever' Kochavi is telling us 'we still in the beginning'."

The Times of Israel reported that "some Israeli officials" admitted that the rate of the rocket fire "was unexpected" and noted that, "In closed-door meetings, the issue of flawed intelligence on Hamas's long-range rockets was also raised."

Meir pointed out that the ongoing battle is "unusual" because of the clashes between Arabs and Jews in Israel, the potential uprising in the occupied West Bank and possible provocations from Hezbollah in Lebanon, Israel's northern neighbor.

One Israeli journalist proposed an escape route for Netanyahu, recalling what the US Senator George Aiken advised the then-President Lyndon Johnson to do when he did not know how to end the war in Vietnam: "Say we won and get out."

I think this will work with Netanyahu better than any other options because the Palestinian resistance groups insist that he must meet their demands, especially those related to the provocative settler incursions at Al Aqsa Mosque and the dispossession of the Palestinian families in Sheikh Jarrah. He is losing hope for a clear-cut victorious end to his Gaza offensive, so he should learn from history and follow Aiken's advice.

By Motasem A Dalloul