General
News ID: 3474743
TEHRAN (IQNA) – As US President Joe Biden hosted a virtual White House Eid celebration on Sunday, Muslim groups hosted a separate event where they called on Muslim Americans to put an end to working with Zionist and pro-Israel groups that attack campaigns for Palestinian rights. 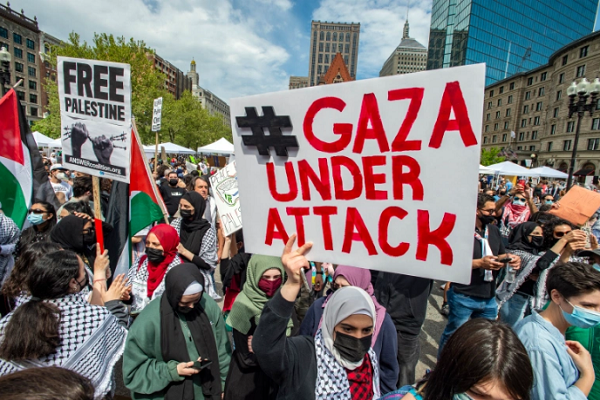 In a virtual panel discussion centering Palestinian voices, organizers condemned the Biden administration for continuing to give tacit approval to Israel's policies, including the war on Gaza, storming of al-Aqsa Mosque and efforts to displace Palestinians in Jerusalem al-Quds.

"At this moment, the White House is holding a parallel celebration for the Muslim Eid al-Fitr," said Osama Abuirshaid, executive director of American Muslims for Palestine (AMP).

At least 181 Palestinians have been killed by Israeli air strikes on Gaza, including 52 children as of Sunday. Ten people have been killed in occupied Palestine from rockets fired from the besieged enclave.

In the occupied West Bank, 12 Palestinians have also been killed as Israeli police and settlers violently responded to widespread protests sparked by the imminent eviction of six Palestinian families from the Sheikh Jarrah neighborhood in East Jerusalem al-Quds.

Earlier on Sunday, US Secretary of State Antony Blinken urged for stopping the violence in Gaza, but stopped short of calling for a ceasefire.

'No more normalizers in our circles'

The panel was attended by a myriad of speakers from diverse backgrounds, from artists to attorneys to engineers to organizers and elected officials. Speakers were also based in both the US and Gaza; Israeli air strikes could be heard as some guests spoke.

During the call, the organizers, including AMP, American Muslim Bar Association, Council on American-Islamic Relations (CAIR), and Jetpac Resource Center, urged Muslims in the US against working with pro-Israel groups that attack the Palestinian rights activists, such as the Anti-Defamation League (ADL).

The ADL presents itself as a leading civil rights group, but more than a hundred human rights organizations called for a boycott of it "in light of a growing understanding of the ADL’s harmful practices" last year.

The ADL has a long history of describing Palestinian rights movements as antisemitic, and has historically worked with US law enforcement agencies to spy on Arab-American groups.

Raja Abdulhaq, a leader at the Majlis Ash-Shura: Islamic Leadership Council of New York, called on the Muslim community in the US to usher in a new era of political mobilization that ends any work or engagement with such groups.

"No more normalization or any kind of relationship with Zionist organizations. Interfaith, local work, political engagement. Nothing justifies it, no excuses anymore," Abdulhaq said during the panel.

Linda Sarsour, a prominent Palestinian-American activist, said it was time to begin calling out those who work with such organizations.

"They have to be called out; we have to call on our community to center morality, to center justice in the way in which we organize in our communities," she said.

"If you are a Muslim organization that is normalizing relationships with organizations who unapologetically or unequivocally in support of the State of Israel, you are not my brother and sister in Islam. I do not want to organize with you I do not want to speak at your conventions."

The panel, largely targeted at Muslim Americans, also called on the faith community to look past giving humanitarian aid to Palestinians, and rather politically mobilize to stop the US military support to Israel, which they said has played an instrumental role in helping Israel commit human rights violations.

"We do not need band aids, a lot of people have been talking to me and saying how can we help? How can I send $100 or $200? No, I don't need that," said Anas Farra, a US-based intellectual property manager who is currently in Gaza.

"I need you to get the bullet off my back, and stop enabling that bully with your own tax money," he said, referring to Israel.

Instead, they called on individuals to pressure their elected officials to call for an end to the annual $3.8 billion in aid that the US gives to Israel, and to pressure their lawmakers to speak up for the rights of Palestinians.

Several US lawmakers, including Rashida Tlaib, Ilhan Omar, and Cori Bush, have spoken out against US military aid to Israel, and a new bill from Congresswoman Betty McCollum is seeking to ban American military assistance to Israel from funding annexation or the demolition of Palestinian homes.