General
The link was copied
News ID: 3475240
TEHRAN (IQNA) – The military operation by Yemeni armed forces and allied popular committees against Daesh and al-Qaeda mercenaries in Bayda, 130 miles southeast of Sana’a, has ended with the former reclaiming swaths of territory. 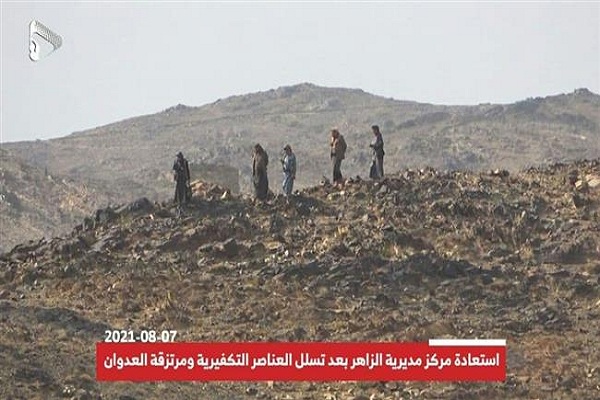 Brig. Gen. Yahya Saree, the spokesperson for Yemeni armed forces, in a statement Tuesday said the operation dubbed ‘Al-Nasr Al-Mubin’ (clear victory) resulted in the liberation of areas in Az Zahir and As Sawma'ah districts of Bayda province that had been seized by the Saudi-backed mercenaries.

During the operation, which lasted 72 hours, the Yemeni armed forces killed and wounded hundreds of Daesh and al-Qaeda mercenaries, and seized a large cache of weapons and other equipment from their possession.

The military spokesman appreciated the people in Bayda Province for their cooperation and pledged to continue military operations “until the cessation of attacks, lifting of the siege, and liberation of all the besieged areas” in the war-ravaged country.

“Yemen has always lived freely, with dignity and independence, and this victory belongs to Yemen and all the free people of the Arab and Islamic world,” Saree noted in the statement.

He said the details about the operation will be published soon, Press TV reported.

The foreign mercenaries sponsored by the Saudi-led military coalition launched attacks on the central Bayda province last week, and overran many key areas.

Soon after, Yemeni armed forces and the popular committees announced Al-Nasr Al-Mubi military operation to reclaim the seized areas and to push back the marauding mercenaries.

After barely 72 hours, the areas were back in the control of the Yemeni armed forces.

Mohammed Abdul-Salam, the spokesman for Yemen’s popular Ansarullah movement, in a Twitter post on Thursday, said the Saudi-led military coalition and its mercenaries failed in their battle against Yemeni armed forces, despite recruiting Daesh and al-Qaeda terrorists.

Dhaifullah al-Shamdi, a minister in Yemen's National Salvation Government, also told RT Arabic that the US was fanning the flames of violence in Bayda province by mobilizing and commanding Daesh and Al-Qaeda terrorists against the Yemeni army.

Saudi Arabia, backed by the US and regional allies, launched the devastating war on Yemen in March 2015, with the goal of bringing the government of former Yemeni president Abd Rabbuh Mansur Hadi back to power and crushing the resistance movement.

Yemeni armed forces and the allied popular committees, however, dealt heavy blows to Riyadh’s nefarious agendas in the Arab country, while putting up strong resistance.

The Saudi-imposed war has left hundreds of thousands of Yemenis dead, and displaced many more. The protracted war has also created one of the worst humanitarian catastrophes in recent history.