General
News ID: 3475943
TEHRAN (IQNA) – Hundreds of Bahraini people took to the streets on Friday to protest normalization with the Israeli regime and faced a crackdown. 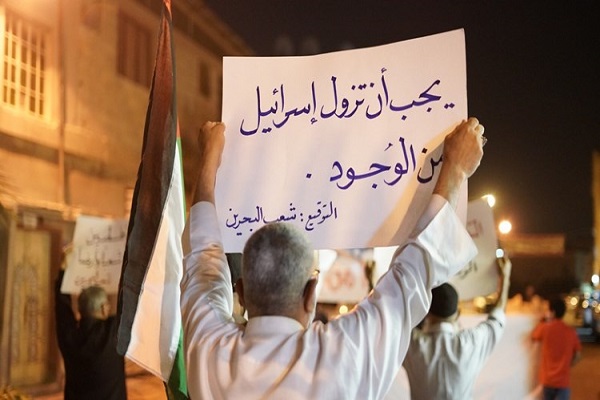 Local sources reported that people’s protests against the normalization was held on Friday, according to al-Mayadeen.

In a tweet, Al-Wefaq society noted that Bahraini forces have cracked down on the protestors.

Also, photos in the social media show that the forces have used tear gas to block the demonstration.

The wave of protests against normalization with the Israeli regime swept over Bahrain after Israeli Foreign Minister Lapid paid a visit to Manama to open an embassy there in late September.

It was the first official visit of Lapid to Bahrain after the inking of the normalization agreement, known as the Abraham Accords.

The Abraham Accords were signed at the White House in September 2020 between Israel, Bahrain, and the United Arab Emirates. Morocco and Sudan later signed normalization agreements with the Israeli regime as well. Palestinians have denounced the normalization deals, describing them as a “stab in the back”.

In a statement, a number of senior clerics said the people of Bahrain and other Arab and Muslim countries are opposed to any normalization with the Tel Aviv regime. They urged Arab regimes not to stand against the will and demands of their nations.